The Road to Exchange 2010: Migration paths

Exchange always had a specific combination of operating systems on which it could be installed. Now with the release of Exchange 2010 RC1,Windows Server 2008 R2 and the imminent Exchange 2007 Service Pack, it has become clear how the future will look like. Below is a table which visually shows the compatibilities:

So unfortunately, Exchange 2007 will not run on Windows Server 2008 R2… That has impact on your possible migration (officially transition) paths to Exchange 2010.

I’ve made an illustration depicting the migration paths: 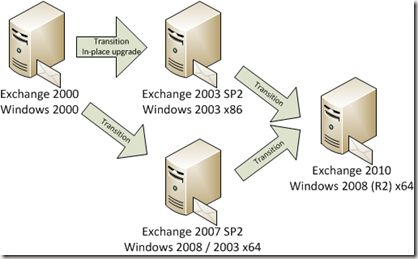 Conclusion: There are no real problems migrating to Exchange Server 2010, they are comparable to the paths you had to take with Exchange 2007. Extra steps have to be taken if you are still using Exchange 2000. And for those who already migrated to Exchange 2007, will have to wait for Service Pack 2 which is expected at the end of this month.

For those who want all servers to be Windows 2008 and have an Exchange server, you will have to wait for Exchange 2010 RTM which will be probably released later this year or you decide to run Exchange 2007 on non-R2 Windows 2008.

Oh, and for those daredevils who are migrating to the Exchange 2010 RC1… You can in place upgrade to RTM!