I love Outlook Web App. It’s rich functionality, management capabilities via ECP and especially the multiple browser support for the Premium experience. Yes, you do not need IE for (almost) full functionality anymore.

Exchange 2007 OWA Premium still was only supported by IE and I ended up using IE just for OWA2007. In my opinion, IE couldn’t compete with Firefox. After an upgrade to Exchange 2010 I fully jousted IE and went on to fully use Firefox with a full featured OWA. *bliss*

But it actually wasn’t 100% perfect; I was annoyed by the authentication pop-up in Firefox… which let my to discover Integrated Authentication support in Firefox! I’ve posted about Firefox, IA and OWA2010 here.

Time passes by and Firefox more and more felt like a slow hog…. So, curious as I am I tried Chrome. With version 8 it was becoming serious contender to be the default browser on my systems. And Chrome is supported by OWA2010. But… again with the authentication popups… argh!

After a goog… bing search suggested that Chromium or Chrome 9 beta had Integrated Authentication support, naturally I had to try this browser. Although it’s a beta, I like its performance and it works well with OWA2010. Better yet, Integrated Authentication only requires that you add the OWA URL in the Intranet Zone in IE or per GPO. See here for more info. Easier than Firefox and similar to Internet Explorer. Sweet!

So, what’s next try? Possibly IE9? Opera? Safari (although that would mean I would have to buy an Apple…SteveJ? When you are feeling better, msg me!)? IE9 probably isn’t a challenge. Opera then? Mhh, version 11 doesn’t support Premium OWA.

But in the meantime is was contemplating my next steps, Mozilla released Firefox for Android beta. Now, I have an Android (HTC Desire with 2.2), much to my satisfaction (though… SMS sync, I miss thee). But sometimes you just want a premium feature and you don’t have a laptop with 3g handy. Unfortunately the built-in browser doesn’t show a premium OWA. Lo and behold, Firefox for Android does support OWA 2010 Premium! 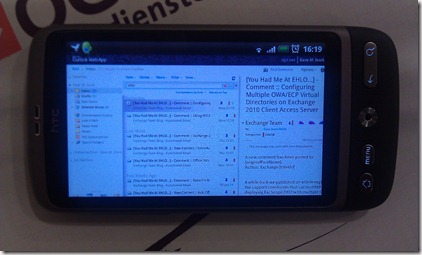 My HTC Desire isn’t the ideal apparatus because of the relatively small screen, but those Exchange 2010 users with an Android Tablet will probably check out Firefox for Android now.