Presenting at the NGN Exchange day

Wednesday was an interesting day as the Dutch IT Pro organization NGN organized a full day of Exchange presentations. I was asked to do tell something about the new Exchange 2013 Architecture.

Unfortunately there is no video recording, so you’ll have to do with this pic (made by Michel de Rooij): 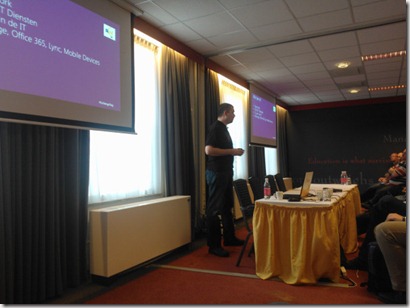 I had a fun day and even as a speaker I learned a lot. As I was revisiting short bits of architecture of previous Exchange versions, I asked how many were still on 2003, 2007 or 2010. I was expecting a lot more 2003 installations (even in this probably non random selection of attendees), but there were just about four hands raised in a room of I think about 75 people. Even 2007 was less popular than 2010. And IMHO with good reason

Other questions were about specific sizing with 2013, unfortunately  we couldn’t provide assistance on that as Microsoft itself hasn’t published this kind of information. Time will tell (and probably a lot of blog posts). Personally the best question was whether there was any benefit to go from 2010 to 2013. I think the panel was in consensus that in most cases 2013 probably does not warrant the investment. There are specific cases that probably will benefit greatly, for one I think organizations with multi site Exchange can benefit immensely with 2013.

The Q&A session at the end of the day was recorded and can be seen below. It is in Dutch however:

The presentations (including mine) are made available in a single ZIP file: here.

Michel de Rooij has also blogged about this day! Check it out.