I was postponing my work laptop Windows 8 Enterprise upgrade to 8.1, because I assumed I would have to install every app over again. My Windows 8 Pro upgrade to 8.1 on my personal desktop didn’t go as smooth as I had hoped. I had to install every (desktop) application again, as I did not have the option to “Keep Windows settings, personal files, and applications” but only “Keep personal files only (data only)” or “Nothing”.

Now, I didn’t update my Windows 8 Pro (retail) from the Windows Store but rather from the earlier released RTM ISO from TechEd (while using my purchased retail key). This led me to suspect that the ISO “upgrade” was part of the problem. As Windows 8.1 Enterprise won’t have a Store update or installer file, I will have to do the same ISO installation on my Windows 8 Enterprise work laptop as I did with my desktop. That didn’t sit well with me… 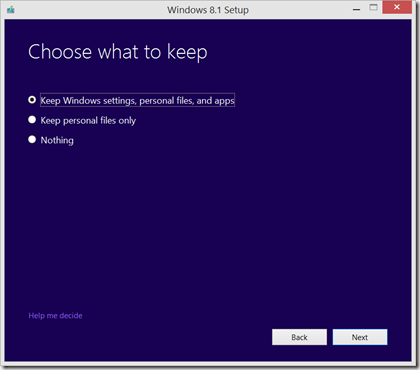 Looking for explicit answers I examined the upgrade paths for Windows 8 which showed that Cross-language Windows 8 updates does not provide the option to keep apps. I surmised that a Dutch version was used with the initial installation and I was now trying to upgrade with an US English version. However, trying to upgrade using a Dutch ISO did not provide me with the coveted “Keep … Applications” option. A web search didn’t help me any further.

Then I remembered that before my Surface RT could get the Windows RT 8.1 Preview, I had to remove all non-US English language packs. And now I had a new hypothesis: installed language packs could prevent keeping my apps, thus I removed all but US English on my Windows 8 Enterprise laptop and rebooted (important!). After this I finally got the option to install with the option to keep applications, while starting the upgrade from an ISO file! I am now running Windows 8.1 Enterprise without reinstalling (most) of my applications. Woohoo!

There is probably a logic here, but I think that a lot of users would appreciate the installer (or even an explicit mention in documentation) telling you why an option is not available. Granted, most non-tech users won’t upgrade from 8.0 to 8.1 via ISO. But the effort on Microsoft's side would be minimal, it would’ve saved me some time and I would’ve upgraded more quickly to 8.1.