Windows Server 2008 Server Core installs with a couple of default settings. In this post I'll look into the Control Panel applets available in Server Core to change some settings. You'll find how to:

When you install your Windows Server 2008 Server Core box you get to configure the language to install, the time and currency format and the Keyboard input from drop down menus. 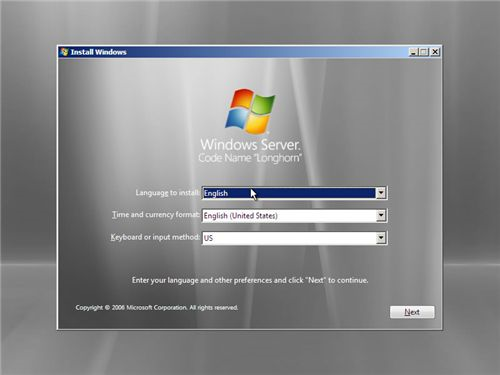 These might not reflect your situation. I can think of other situations where you might find yourself wanting to change Regional, Language, Time and Date options on your Windows Server 2008 Server Core box. For instance when you move the box from one (international) location to another and when you receive a fully configured Virtual Image containing Windows Server 2008 Server Core.

Since Server Core doesn't allow you the use of Explorer Windows, a Start Button, or a Control Panel your usual path to get to the Regional and Language Options isn't going to work: You need to run a command.

If you're into commands to get things done quickly you might already know the command to get straight to Configuration Panel items by running the appropriate CPL file in the %windir%\system32 directory. If you don't, here it is:

This command presents the decent Configuration Panel screen you might or might not know from Windows Vista yet. To be quite frank: It is exactly the same: 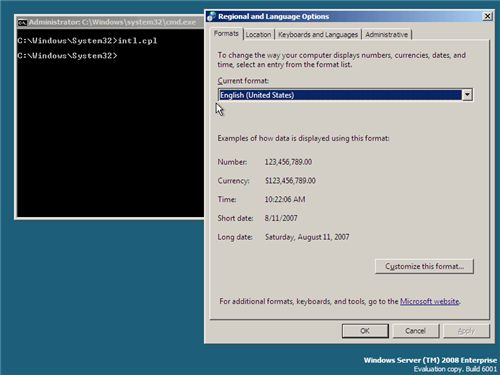 Here are some useful tips from Microsoft's Windows Vista Help and How-to pages:

You can alternatively change the Regional and Language options through the registry or even XML.

The registry is ultimately the place where Windows stores its vital information. Since Server Core has Regedt32.exe on board you can easily edit the Regional and Language Settings in the following places:

If you're geeky about your Regional and Language Options (International Settings) you can always opt to configure these using XML. (also some scripting examples available using intl.cpl)

After typing the command you find yourself with the same familiar Control Panel screen as in Windows Vista and Windows Server 2008. Remember this window will only allow you to change the time, the date and the time zone, create additional clocks and configure time synchronization settings. How time gets displayed is configured through intl.cpl. 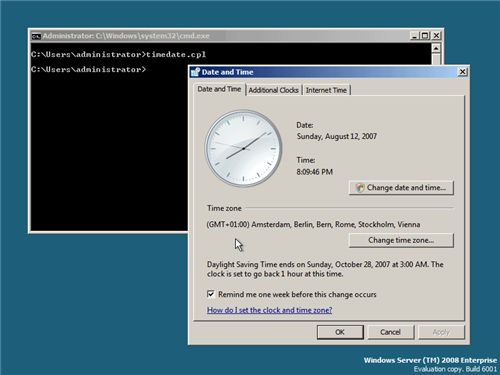 Again the Windows Vista Help and How-to pages explain how you can:

Changing the time zone is a bit more tricky, but certainly not impossible. Microsoft Knowledge Base article 914387 explains how to accomplish this by editing the registry and restarting your box.

The settings for Time synchronization are mentioned in Microsoft Knowledge Base article 222184.

Timedate.cpl and intl.cpl are the only two Control Panel items in the June CTP of Windows Server 2008 Server Core and they seem to resemble their Windows Vista counterparts. This leaves me with some questions and remarks.

The Control Panel applets have hyperlinks linking to help files. Apparently the Windows Server team wants us to learn how to set the clock and time zone, what Internet time synchronization is, how to change the keyboard layout for the Welcome screen, how to install install additional languages, what a system locale is, what reserved accounts are and where to find the Microsoft website.

Why are the links to the Windows Help still in the Control Panel applets? There's no Help and Support and there's no Internet Explorer.

The Time and Date Options Control Panel applet gives us the opportunity to specify additional clocks. Many people found this feature to be excellent, because it allows them to see the time at different places by just hovering over their taskbar. I'm just not sure why Server Core has this feature. First of all I don't know any application that relies on this feature and at second thought: Server Core doesn't have a taskbar, because it doesn't have explorer…

I can certainly see the use in the Regional and Language Options and Time and Data Options. Where are the other Control Panel applets? Desk.cpl might make the lives of Server Core Admins a lot more easier (as you'll find out in Part 2 of this series) when they decide they want to adjust the screen resolution or screensaver settings. Main.cpl would mean so much to the left handed Server Core Admins.

I showed you how to change the Regional and Language Options and the Time and Date Options of your Server Core box. These changes were pretty easy because Server Core supplies two Control Panel applets.

I'm not sure whether Windows Server 2008 Server Core or further releases on the Server Core track (if any) will still sport Control Panel applets. They make it easy to change things, but I wonder if they're really necessary: You could also change the settings in the Registry manually. (… and if it's stored in the Registry than it can certainly be changed through Group Policies…) Perhaps the reason we find them in the June CTP of Windows Server 2008 Server Core is some strange dependency in other parts of the Operating System.

In part 2 of this series I'll show how to change the Display Settings, although there isn't a Control Panel applet to do this.

One Response to Changing Server Core's Look and Feel, Part 1