After playing with the remaining Control Panel applets it's time to look at how Server Core looks on your screen. Despite the absence of desk.cpl we're still going to adjust the settings you can adjust using the Display Properties Control Panel applet.

Note:
Some of the settings explained in this post might not represent your situation when you install custom video drivers on your Windows Server 2008 Server Core box.

After installing other Windows versions you might find yourself confronted with a message screen proposing to adjust the screen resolution for you. Since Windows Server 2008 Server Core normally relies more on the command line tools than on the graphical tools this windows will not be shown.

You can change the screen resolution by modifying two registry values. These two values are:

Where GUID is a randomly generated GUID.

You can actually specify any XResolution and YResolution value as long as they are hexadecimal.

A good way to change your Screen resolution is to write down the amount of pixels you want to fill your screen width with (this is the XResolution) and the amount of pixels you want on your screen height (the YResolution). The Windows calculator (not available in Server Core , you will have to find another computer or a hardware advanced calculator) offers an easy way to convert decimal amounts to hexadecimal amounts. You can then use these values to modify the corresponding registry values. A restart will make your preferred screen resolution meet reality.

The color depth used on your monitor is captured in the following registry value:

The refresh rate is the amount of times your screen gets fully refreshed and is expressed in Hertz. You can change the following value with your desired amount of Hertz:

The standard settings for the Screensaver is to run logon.scr after a 10 minute time-out (or more precise: 600 seconds) and to protect the screensaver with a password. I'm not making this up. I just read these settings from the following registry values:

Using regedt32 you can easily change the behavior of your screensaver:

To disable your screensaver you change the value HKEY_CURRENT_USER\Control Panel\Desktop\ScreenSaveActive from "1" to "0".

Changing the screensaver is as easy as changing HKEY_CURRENT_USER\Control Panel\Desktop\SCRNSAVE.EXE. This value reads %windir%\System32\logon.scr (the Windows Logos) by default. You can change it to scrnsave.scr (Blank Screen) if you prefer it.

I can't find a reason why you'd want to change the ScreenSaverIsSecure, because it asks for credentials when you try to wake the server from its screensaver. If you do than you can do this by changing the HKEY_CURRENT_USER\Control Panel\Desktop\ScreenSaverIsSecure value from "1" to "0".

If you're the kind of person that likes to ponder over your commands or just needs some time you can adjust the amount of time before the screen saver kicks in. The HKEY_CURRENT_USER\Control Panel\Desktop\ScreenSaveTimeOut value specifies the time out in seconds. 600 seconds add up to 10 minutes. 3600 seconds will buy you an hour of idle time, but any reasonable value will do.

Jose Barreto has made a dump of the registry values under the following keys:

The registry values under Control Panel\Colors make up the color scheme for your windows by specifying RGB(Red Green Blue) values separated by spaces: 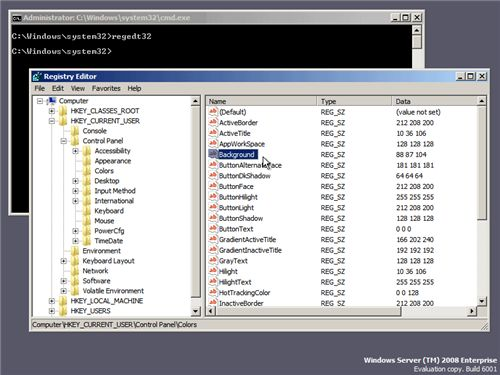 You're out of luck if your wish is to have a background picture in Windows Server 2008 Server Core. (Although you can make a new string value called "Wallpaper" in Control Panel\Desktop this won't actually show the wallpaper at all)

To complete the settings you'd normally find on the Appearance Properties window is the fonts used for captions, icons, menus, messages and bars as well as the sizes of these items. These settings are all under the following key:

Windows Server 2008 Server Core has the DragFullWindows setting enabled by default. This setting configures whether the content of window keeps getting showed while you drag it around. If you want to disable it you change the string value for HKEY_CURRENT_USER\Control Panel\Desktop\DragFullWindows from "1" to "0".

The Smooth edges of screen fonts checkbox that you find on the effects screen is hidden inside the HKEY_CURRENT_USER\Control Panel\Desktop\FontSmoothing value. In Server Core this value is typically set to "2", which enables it. When you change it to "0" you disable it. "0" and "2" are the only working values.

The last thing desk.cpl can do for you is to set the system wide font size. (one of the advanced settings) In Windows Server 2008 Server Core you can change the settings in the registry, but they won't take effect. I didn't see any difference in the graphical tools between different settings, ranging from 72 dpi (0x00000048) to 192 dpi (0x000000c0)

Windows Server 2008 Server Core doesn't have a Display Properties Control Panel applet to change your display settings. No need to worry though, because you can change all of these settings in the registry.

Some settings won't work in Server Core (yet):

I seem to enjoy turning the registry of my Server Core box inside out, because Part 3 of this series will also contain a large portion of registry editing. No Display settings like this post, but Mouse and Keyboard settings.