There are some things you need to know before I can start to explain why Server Core is the ideal Root Partition. I'll explain the Hyper-V Architecture here briefly, so you might have a better understanding of the internals of Hyper-V.

From within the Root partition you can create new Partitions, called Child Partitions, in which your Virtual Machines run. These Virtual Guests use the VMBUS to communicate through the Root Partition, its Virtualization Stack, its device drivers and its Hardware Abstraction Layer (HAL) with the physical hardware.

I guess the picture below says more than a thousands words: 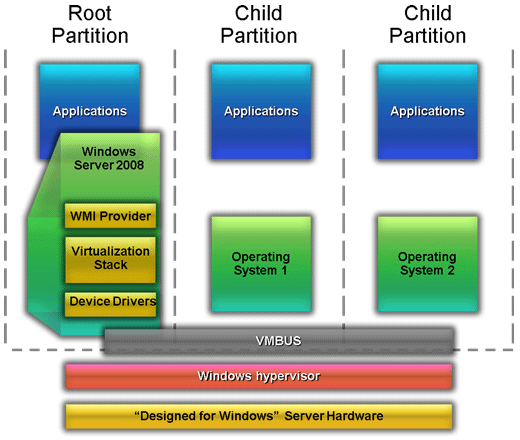 The way Microsoft implemented its HyperVisor has a couple of big advantages and also some disadvantages.

The advantages of the Hyper-V implementation are you don't need to know Linux (in the case of VMWare ESX), you don't need difficult or hard to find device drivers (the Windows Server 2008 x64 ones will do nicely) to interact with the hardware (abstraction layer) and you can utilize your favorite management tools (RDP, MMC, WMI, PowerShell, etc.)

The disadvantage of Hyper-V is performance, because of the VMBUS. Every Virtual Guest communicates with the Virtual Host to get something done by the hardware.

Where Server Core comes into play

Since Server Core can also be used in scenarios with other Server Roles (Active Directory Domain Controller, DNS Server, DHCP Server, WINS Server) another advantage might be you can use the Root Partition to deliver these infrastructure services to the Virtual Guests.

The big disadvantage of Server Core (which is manageability) isn't a big disadvantage in the Server Core scenario. Installing Server Core is as easy as installing a Full Installation and nearly everything action you want to perform on a Server Core installation can be done via the Windows Automated Installation Kit (WAIK), Group Policy or Windows Management Instrumentation. The Virtualization team is working hard to release the Hyper-V Management Console (MMC) as a package for Windows Vista, which will be a welcome addition to the Windows Management Instrumentation. System Center Virtual Machine Manager tops the management bill.

The Hypercall API's will also be licensed under the Open Specifications Promise (OSP) which might result in powerful (open source) Hyper-V management tools on top of Windows Server 2008 Server Core.

Installing Hyper-V on Server Core is now available and I personally believe Server Core will be the ideal Hyper-V Root Partition.

The big remaining question to me is what Microsoft's standalone Hyper-V product (named "Microsoft Hyper-V Server") will look like, on what it will be based (Windows PE rumors are wide spread) and what functionality will be available.