[…] looking at the Windows Server Security Bulletins over the past two years, 40% of them would not have applied to a theoretical Server Core build. The results of the analysis are encouraging in terms of security progress.

In this post I'll look at the updates required for various flavors and derivates of Windows Server 2008 and the implications in terms of (planned) downtime between these flavors.

Note:
This blogpost is not intented to fully research the difference in the total amount of updates between a Server Core installation and a Full installation of Windows Server 2008. It merely provides a comparison based on a random moment in time as reference material. It does not take refreshed updates into account.

The only setting I changed during installation was the keyboard lay-out which I set to US-International.

I installed and checked for updates on Wednesday October 22, 2008.

In the table below you'll find the updates by Knowledgebase Article number per installation:

When distinguishing between security updates and updates that improve the performance, stability and compatibility of Windows Server 2008 the following figure shows what Microsoft meant: 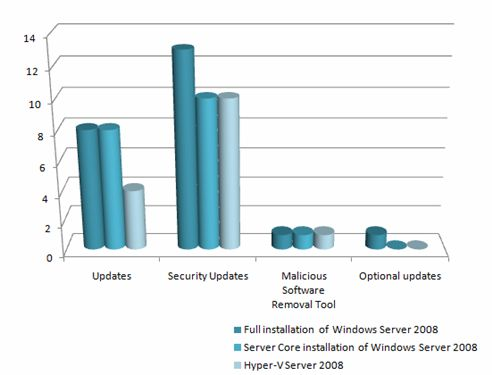 This 23% difference might not result in less (managed) downtime for applying updates, since roughly the same updates apply. (2 differences)