Windows Server 2008 R2 and Windows 7 include new features in Active Directory, that were announced and explained at Microsoft’s Tech∙Ed Europe Middle East & Africa (EMEA) conference for IT Professionals in Barcelona (Spain) from November 3rd, 2008 to November 7th, 2008.

Note:
This post represents the plans and progress made for Windows Server 2008 R2 and Windows 7 during the Milestone 3 timeframe, builds 6801 through 6937. 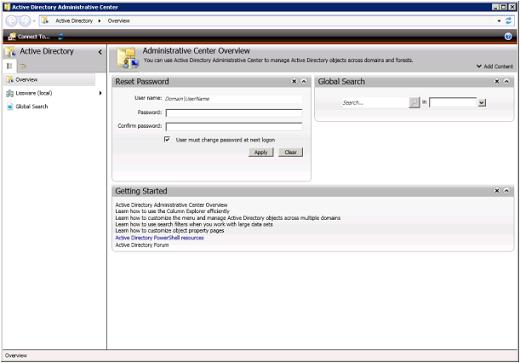 The new Management Console is a graphical shell for Powershell. After clicking together your commands, the administrative center shows the corresponding Powershell command on the screen and then execute it. This is the same way the Exchange 2007 Management Tools and Virtual Machine Manager 2008 work.

A feature called “Progressive Disclosure” is there to limit the information the tool returns to the administrator. This is useful for beginner administrators, but might also prove useful in delegation scenarios.

The power of Powershell is not to be dismissed in Windows Server 2008 R2. For all you command line avoiders out there: there’s Graphical Powershell. This tool provides a Graphical User Interface (GUI), that allows you to interactively create and debug Powershell scripts within an integrated development environment similar to Visual Studio: 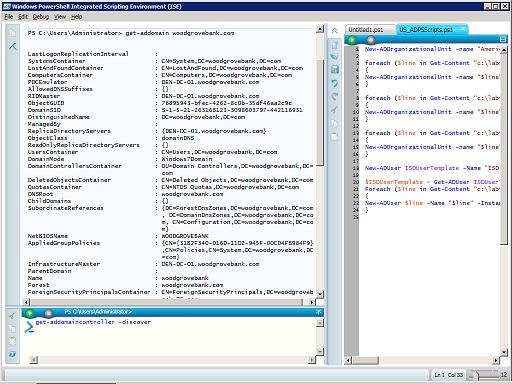 The Powershell CMDlets (and thus the Administrative Center) will use AD Web Services and the Windows Communication Foundation (WCF) instead of the common RPC and LDAP interfaces we use nowadays. According to the team this is the first step for leaving the RPC model and embracing a web services approach. The Active Directory team has plans to release a download of AD Web Services for previous versions of Windows Server. (Windows Server 2003 and Windows Server 2008)

Windows Server 2008 therefore comes with a Recycle Bin for Active Directory, that can be enabled. This features enables administrators to quickly undo an accidental deletion from Active Directory. It works like the Recycle Bin on a Windows client and allows an administrator to fully undelete a deleted object, because an object will not get tombstoned (immediately) but made inactive, while all the attributes and values are kept intact for a period of 180 days. After this period it will get recycled for 180 days, which effectively has the same function as the tombstone period.

To make the recycle bin possible a new forest level is introduced.

One of the new features of Windows 7 and Windows Server 2008 R2 is their ability to join an Active Directory domain, without a direct communication path between the client wanting to become a member of the domain and a Domain Controller.

Active Directory Federated Services in Windows Server 2008 R2 includes a new feature known as Authentication Assurance. This feature allows administrators to establish authentication policies for accounts that are authenticated in federated domains. This enables a variety of advanced authentication scenarios, such as smart cards, for example.

In a Windows Server 2008 R2 level domain Administrators can map various properties, including authentication type and authentication strength to an identity and based on information during authentication, these identities are added to Kerberos tickets (such as use of smartcard for logon or the certificate used 2048 bit encryption) to provide access to federated resources. This way authentication methods (and thus identification) get assured.

Monitoring Active Directory with System Center Operations Manager (SCOM) has not been easy, with the absence of a specific Management Pack and Health Model. In System Center Operations Manager (SCOM) a Management Pack describes what to monitor and are made of XML files, containing classes, discoveries and monitors. The monitors are part of the Health model, which describes how to monitor.

The Active Directory team is working on completing the Management Pack and Health model to proactively monitor the availability and performance of Active Directory, so problems can be identified faster and resolved more accurately. The Health model is reused in the Best Practices Analyzer. One of the big advantages will be the ability for administrators to drill down in System Center Operations Manager to identify an underlying problem with Active Directory.

A lot of advancements are being made to Active Directory management. In Windows Server 2008 R2 not only do we have more reliable authentication and service accounts, but also we can undelete objects in an easier way, join machines to the domains in an easier way and resolve problems more easily and without expensive 3rd party programs.

One Response to An early look at new Active Directory features