This former employer, Smart-X, has now brought CoreConfigurator back to life.

Smart-X dedicated a webpage to the tool. The page explains what the tool does and what it looks like.

It also explains the licensing:
The tool is free for personal use only.

The tool has been polished with a new sleek User Interface: 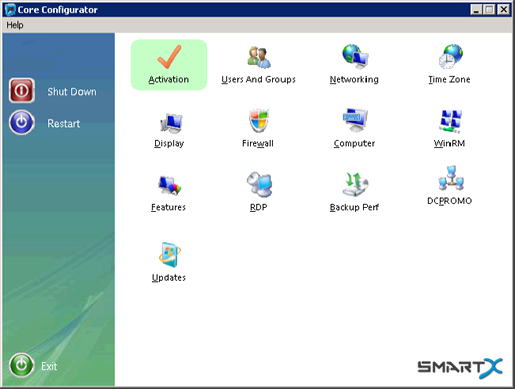 Working with the tool

The package is only available as a HTTP download only. Making the download package available through a public FTP server might prove an interesting move. That way the package can be downloaded directly from the Server Core box itself, eliminating the need for a download box.

For a commercial package a User Guide is a must. I think providing the user guide in PDF is a good move. It allows Unix and Linux guys to get started with the tools on their Server Core boxes too. (I feel Hyper-V with SuSe Linux Enterprise Server 10 guests make for a nice combo) Using a Word format would’ve been a huge barrier for these kind of guys.

The User Guide is pretty straightforward. I really don’t like the advertisement for other Smart-X tools though, but Page Dn fixed that little bit of irritation pretty quickly.

Too bad however the really cool features of CoreConfigurator are left out of the User Guide. I was really expecting a thorough write-up of the DCPROMO function, but unfortunately this feature is absent, just like the Backup Perf feature. Interestingly enough, these two features were part of later versions of Guy’s CoreConfigurator.

The User Guide gives me the impression a team at Smart-X has written a Windows Vista Configuration Panel-style window to accommodate all the buttons, left the features intact and actually didn’t know what these features do, so they kept away from them.

Installation is pretty straightforward for a MSI file, although I’m still unclear why tools like these need to be ‘installed’. A lot of other tools simply run off media. Joachim’s CCC even has a menu option to install the program on your Server Core box automatically.

Making CoreConfigurator available as a MSI file, instead of a package is not a really bad idea however. Since you’re installing a MSI, you can uninstall the program through wmic.exe if you don’t need it anymore. Other setup formats require a lot of fiddling to get uninstalled. Providing a ISO file next to the MSI file would make using CoreConfigurator in virtual environments more practical.

The installation itself is as simple as clicking Next > three times.

I don’t understand why some people still have a problem with making their program automatically start at logon or add the path to their executable to the PATH variable.

The tool has been polished with a new sleek User Interface, resembling the Windows Vista Configuration Panel:

Since the adoption of Windows Vista worldwide is through the roof, this was a good decision. NOT!

Learn a man to fish…

The 13 tools available through the start screen are very useful. Unfortunately only the Activation tool shows the command used to retrieve the information. None of the tools show the commands used to set the information or the registry keys changed. This reminds me of an old saying:

I feel The CoreConfigurator Tool isn’t very helpful. It is helpful to Smart-X though, because people come to rely on CoreConfigurator to do these little choirs for them whenever they install a new Server Core box, driving sales.

The Exchange team does a very good job at this in the Exchange Server 2007 Exchange Management Console. Every time you click together a command it shows you the corresponding command before it executes it. That’s helpful!

CoreConfigurator does not display information in the start screen on the current box or current configuration, like the Windows Server 2008 Server Manager does.

CoreConfigurator still has a few bugs unfortunately, that make it less useful in a lot of environments. For instance you can’t add Domain user accounts to local groups using Users and Groups but you can still use Users and Groups after promoting the server to a Domain Controller. Changing Display settings prompts for a reboot, while logging off and on again will change it (if there were a log off button, that is). The firewall configuration tool will not detect whether the firewall is turned off, rules have been specifically enabled or disabled or keep a log of it’s own activity and the Feature installation tool isn’t very thorough in displaying installed features.

The tool lacks a button for the Regional and Language Options. This functionality is included one of the remaining Control Panel applets in Server Core installations of Windows Server 2008: intl.cpl.

The Updates section allow to enable and disable Automatic Updates, but does not offer functionality to check for updates manually.

I still feel it’s a shame a great free tool, written by a MVP, gets transformed into a paid tool.

On the other hand now a big company has made it dedication clear to a large community to develop and maintain a tool, addressing a basic need. If I were to license this utility I would insist on Smart-X squashing the reported bugs in the next version, provide a roadmap for future versions and make some smart technical choices to up the quality.

In the meanwhile I’ll still continue to use Guy Teverovsky’s original CoreConfigurator utility. It provides the same functionality but remains free of charge for those who can find it.

Other tools are also available at no cost and won’t nag you with a license and splash screen. These tools offer a great alternative in some scenarios.