Now that Microsoft has released the beta of Windows Server 2008 R2 to the public it’s time to get our hand dirty and install this test version.

Let’s look at the system requirements Microsoft recommends and how to install it!

Before you start playing with Windows Server 2008 R2 Beta you need to understand a couple of things:

This blogpost covers a fresh Server Core installation of the x64 version of Windows Server 2008 R2 Enterprise Edition, using media download through a TechNet Plus subscription.

To install Windows Server 2008 R2 Beta you will need a box with a 64bit capable processor. In addition Microsoft has made the following statement regarding system requirements:

Note:
Other locations to download the ISO file exist, but you should be aware of the reputation of the provider. Only a download from a Microsoft website guarantees the ISO file is not tempered with.

The ISO file you can download is an image file, representing the optical disc. The file contains all the files and filesystem metadata. In the case of Windows Server 2008 R2 the ISO file represents a bootable DVD.

You can use the ISO file directly to install Windows Server 2008 R2 in virtual environments and through popular remote installation environments like WDS, iLo and DRAC.

where X:\ is your mounted image or physical DVD and Y:\ is your USB
device

Now all you need to do is plug the USB drive into your target box' USB slot or your DVD disc in your DVD drive and boot the box. (The target system will need to be able to boot from DVD or USB devices to perform an installation) The system will boot into the new Windows 7 boot screen, as shown below: 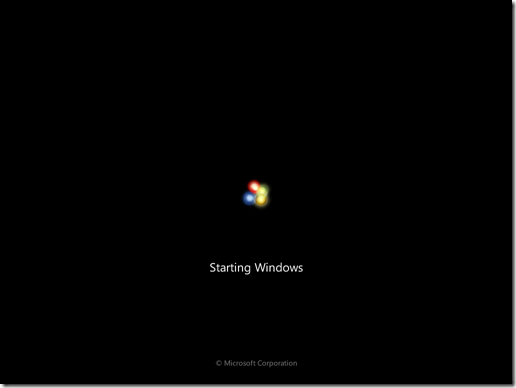 After you’ve booted the box you will be presented with the Installation wizard. 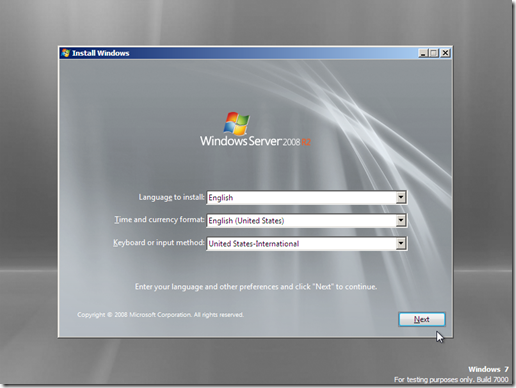 The first things the Installation Wizard wants to know is the language to install, the time and currency format and the keyboard or input method. When your done making your choices, press Next. 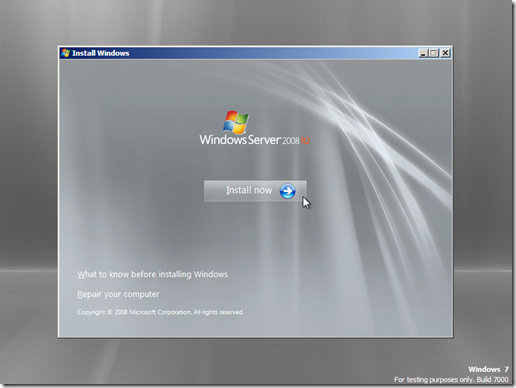 Unless you want to repair your computer (to enable booting from VHD or make other advanced changes) press the Install now option. 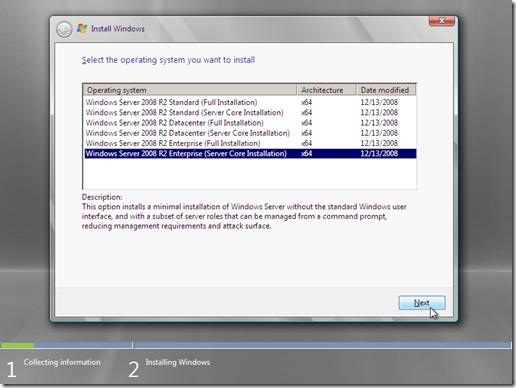 The next screen requires some thought: You get to choose which version of Windows Server 2008 R2 Beta to install. The media used here offers three editions and for each of these editions offers a Server Core installation besides the choice to do a Full installation. 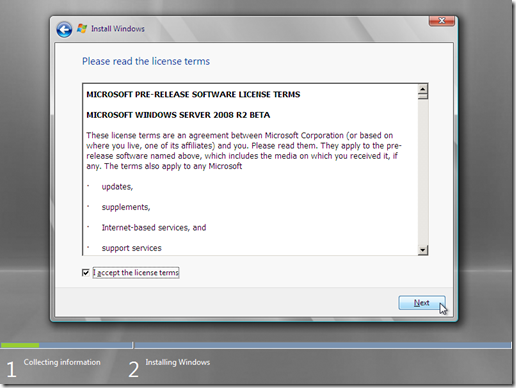 Acceptance of the License Agreement seems mandatory for Microsoft products. After you read this agreement you can select the I accept the license terms roughly 45 minutes later (Yeah right!) and press the Next button. 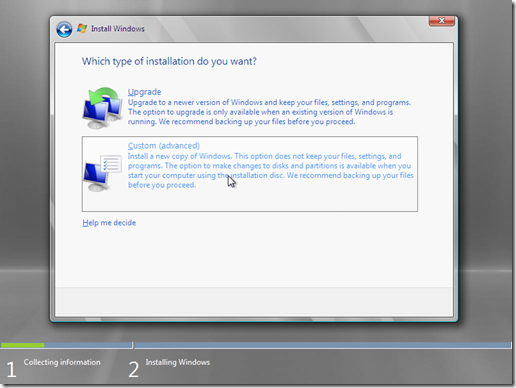 Since the hard disk in this box is not equipped with an existing Windows installation the choice here is obvious: Custom (advanced) Why the Upgrade option is available is a mystery to me… 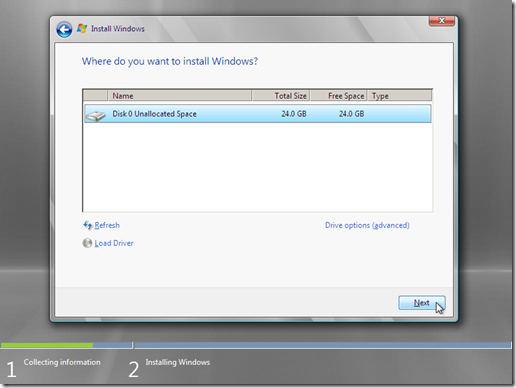 Now a screen appears that also requires some thought. In this screen you get to choose where to install Windows. This means options are available to partition disks and load drivers for exotic storage controllers. The best practices regarding partitioning your disks and placing dynamic data off the C:\ drive apply.

Note:
The screenshot above is not representative for the storage best practices regarding Windows Server 2008 R2, but more than appropriate for testing purposes. 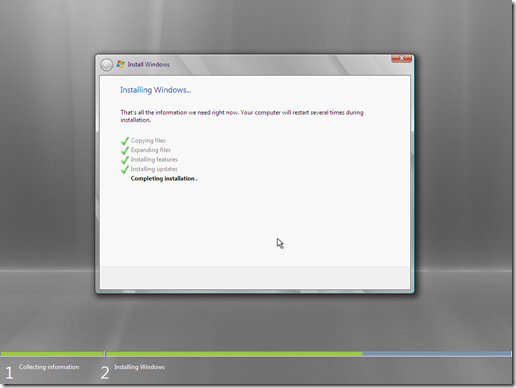 After the Installation Wizard completes the system is booted for the first time. (Notice the Windows Vista-like boot animation here?) 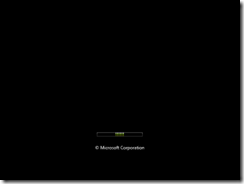 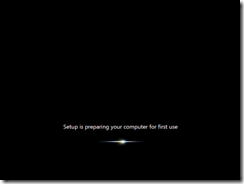 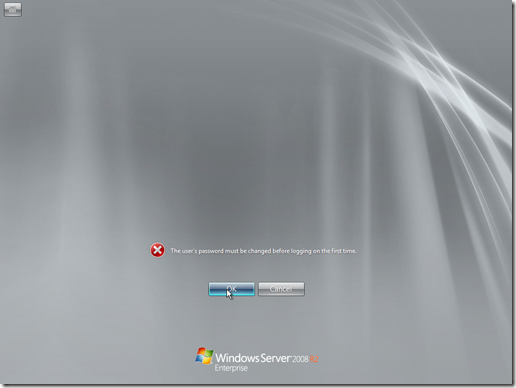 After booting Windows Server 2008 the first time, your fresh installation will ask you to change your password. 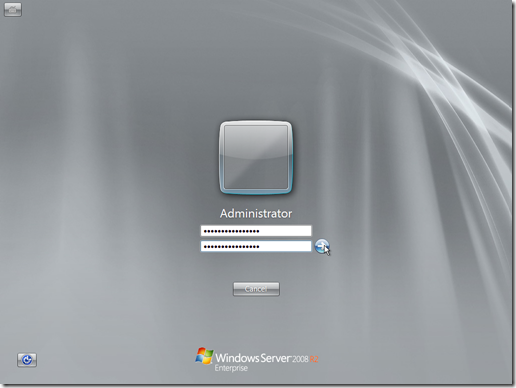 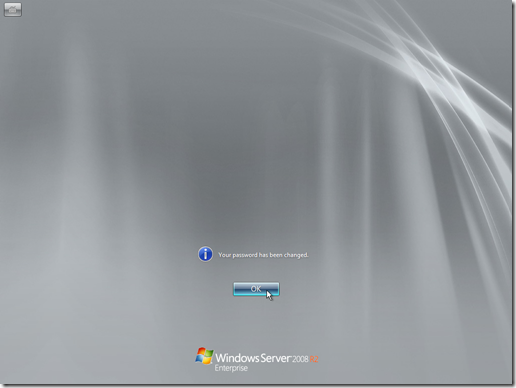 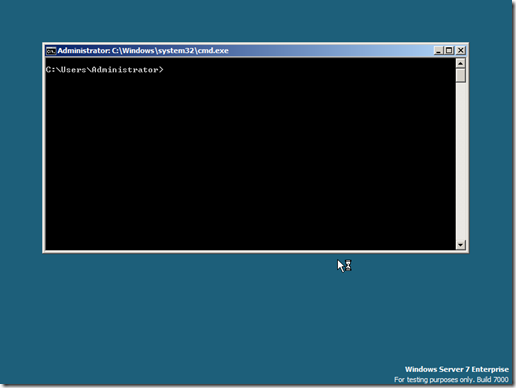 Don’t forget to activate your copy with one of the five available product keys when you want to enjoy it for a longer period of time.