Since Saturday January 10th, Windows 7 Beta (build 7000) has found its way to a lot of people downloading its bytes from the Microsoft download servers, to find themselves confronted with a fantastic looking creature after initial installation: 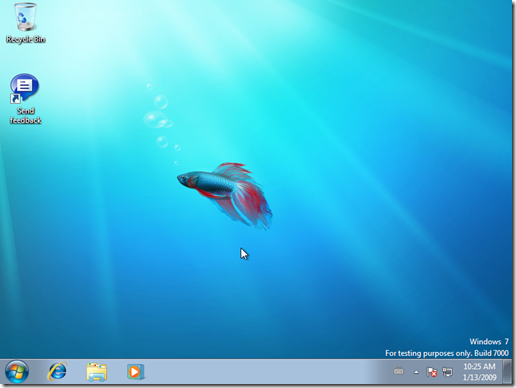 According to Tim Sneath the creature in the middle of the default desktop is a Siamese fighting fish.

Now what is a fighting fish doing on the default screen?
(spoiling the default background we’ve come to love since build 6801)

Wikipedia sheds some light on this creature and tells the story of an inside joke by the Windows team:

The Siamese fighting fish (Betta splendens), also known as the "betta fish" or just "betta", is one of the most popular species of freshwater aquarium fish. It is native to the rice paddies of Thailand and called pla-kad or pla-kat ("Biting Fish") in its native Thailand.

The name Betta (or betta) is pronounced /ˈbɛtə/. The name Betta is not a to be confused with the Greek letter beta. Instead, the name of the genus is is derived from ikan bettah, taken from a local dialect of Thailand.

B. splendens usually grow to an overall length of about 6.0 centimetres (2.4 in), though some varieties reach 8.0 centimetres (3.1 in) in length. In recent years breeders have been able to create "Giant Bettas" that exceed 8.0 centimetres (3.1 in) due to the manipulation of a mutant gene. Although bettas are known for their brilliant colors and large, flowing fins, the natural coloration of B. splendens is a dull green and brown, and the fins of wild specimens are relatively short. However, brilliantly colored and longer finned varieties (i.e. Veiltail; Delta; Superdelta; and Halfmoon) have been developed through selective breeding.

So let’s look at the pronunciation of the word ‘Betta’: *

That’s right! the Siamese fighting fish is pronounced as the Beta fish.
No more appropriate creature could’ve been placed on the desktop of build 7000 of Windows 7, it is the Beta build!

* Sound courtesy of American Heritage Dictionary of the English Language on bartleby.com

One Response to Windows 7 Beta, fishing for clues