With Windows Server 2012, Microsoft introduces a new local file system, called Resilient File System (ReFS). This file system can be used as an alternative to NTFS, the file system we’ve come to love and use on our servers in the past years.

When it comes to Active Directory, however, you should be aware of a couple of issues.

The codename for the Resilient File System (ReFS) was the Protogon. ReFS is quite different from NTFS. Quoting the “Application Compatibility with ReFS” document from Microsoft, when used, ReFS offers the following capabilities:

For more information on ReFS, see Building the next generation file system for Windows: ReFS.

What’s the impact of using ReFS?

From the official Microsoft documentation, ReFS sounds like the best thing since sliced bread; it makes your file systems resilient to disk corruptions, battles bit rot and elimates the (offline) use of chkdsk.exe. 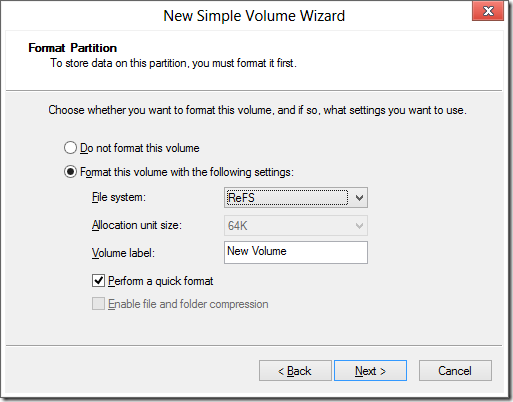 You’d be tempted to select ReFS for the file system within the New Simple Volume Wizard, right? Luckily, the Volume Wizard doesn’t select ReFS as the default file system to format new volumes with. Also, by default your Windows Server installation does not reside on a ReFS-formatted volume.

Storing the Active Directory database and SYSVOL on ReFS

Before choosing ReFS for a volume of disk on your proposed Windows Server 2012-based Domain Controllers, make sure you’re not going to use them as storage for the Active Directory database or the System Volume (SYSVOL). Use the NTFS file system for these volumes or disks.

Also, when deploying Windows Server 2012-based File Servers, make sure you don’t format the volumes and disks containing group data with ReFS.

One Response to Active Directory and the Resilient File System (ReFS)