I’ve been a production Windows 8 user since the Windows 8 Developer Preview. Like you, I’ve been through the stages of Kübler-Ross with the new Windows 8 Interface (formerly known as ‘Metro’).

At first I started cluttering my Start Screen with the built-in applications and tended to focus on the ones that featured a Live Tile to show me information in a glance. Looking at my Windows Store history, I then focused on games like Fruit Ninja and Cut the Rope. I also use some apps that allowed me to snap them for easy multitasking. AMS Airport is the app I use the most in Snap View, although with the new versions Skype and Lync can be snapped too, in the way I used to let Messenger fill up the right side of my screen.

Now, with Windows 8 released, many developers have developed Apps for The New Interface. Three of these apps, to me, show the potential of The New Interface as an IT Pro tool, instead of just a gimmick: 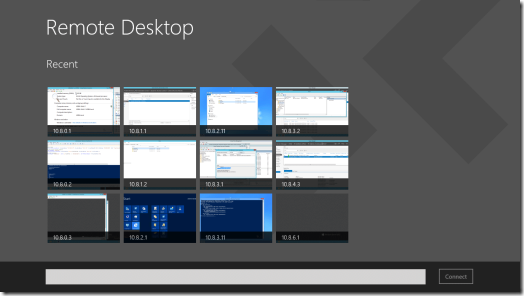 Its main screen is as clean as can be. At the bottom there’s an address bar where you can insert hostnames, DNS names, IPv4 addresses and IPv6 addresses (between brackets). Above is the history of your previous Remote Desktop sessions. You can quickly reconnect to a previous session and when in a session you can quickly switch between sessions through the app bar (Win+Z). It allows for Remote Desktop Apps, Remote Desktop Gateway and Credential Storage.

If you’ve been to the 2011 or 2012 MMS events, you have probably seen the Hyper-V Mosaic. It features the desktops of all the Hyper-V guests in an environment as thumbnails. More info here. In more modest environments, you wouldn’t need a 3×3 grid of LCDs and the ability to display 2000+ virtual machines. In this case, the Hyper-V Manager app might be just what you’re looking for. I know I was.

Note:
The installer will automatically open port 15315 in your firewall for all profiles, so you might want to limit that in production environments) 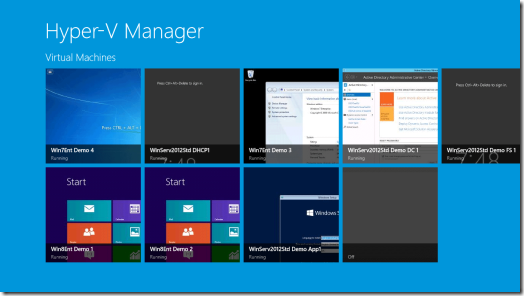 The main screen of the app displays Tiles for Virtual Machines. To the right, it displays Tiles for Hyper-V hosts. Within the app you can Start, Pause and Save Hyper-V guests. You can zoom in on a virtual machine and see its full desktop (not just the top right of the screen), IP address, hostname, Operating System and CPU usage. When zoomed in you can flip ahead and flip back through the list of virtual machines.

Through the Server Tiles, you can switch Hyper-V hosts quickly.

The app does not offer remote management of Hyper-V guests. You cannot connect to them interactively, although you can monitor them. The app does not offer an App bar, but you can snap the app to the side of your screen, where it will display a vertical list of the Virtual Machines and Servers. When you click on a Virtual Machine when snapped, you will see the same information and option as you would when the app is not snapped.

Without network connectivity most of todays devices are pretty much useless. Unlimited data, however is no longer a given and Windows 8 supports metered connectivity to avoid  costs when you’ve reached and cross the data limit. If, however you’re curious on your data usage, you can use the built-in network usage statistics, but these won’t provide you with a historic view of your data usage.

To this purpose, I’m using What’s IP, a variant of Bugs Bunny’s "What’s up!?". This app was developed by S2 Apps. On the Start Screen, it’s Live Tile shows your IP address, the IP address on the external side of the network (if different from the first IP address) and if there’s Internet connectivity.

The app itself shows more information on IP addressing. It also shows your network data usage in a bar graph. It’s easy to see how much data you’ve used up in the past seven days. The app allows for snapping. It will display the Network Status, excluding the bar graph. 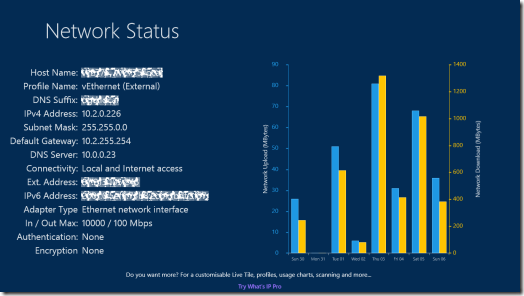 At the bottom of the screen, a text ad is shown for What’s IP Pro. This 1,99 upgrade lets you customize the Live Tile, allows for more views and charts and can perform scanning. I haven’t seen much use in upgrading thus far.