A couple of years back, I organized a couple of trips to the CeBIT fair in Hannover, Germany for my company. It was great to see all the new technologies on display and talk strategy with many of the industries biggest companies and countries.

This year, to my great pleasure, I’m back at CeBIT Hannover.

A few years back, the big plan was to spend the Saturday and Sunday with sixty-odd colleagues at the fair. We would leave from Delft at 5 AM, spend a couple of hours on a bus and then spend the rest of the opening hours at the fair. For diner we would eat schnitzels and drink 1-liter beers at the Münchner Halle at the Hannover fair grounds: 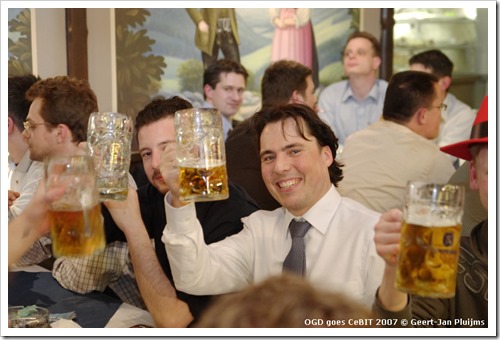 A couple of nights rest at a hotel nearby would recharge the batteries for another full day at the fair. At around 5 PM we would ride back. This has been our rather successful playbook for four company visits to CeBIT Hannover 2005 though 2008.

Putting sixty people in a bus didn’t sound like a good plan in the current economic situation, so for this year, I opted to go with four colleagues. Since CeBIT Hannover no longer spans the weekend, we’re visiting Wednesday March 12th, 2014. On our way back we’re staying at the Best Western Premier Parkhotel Kronsberg, conveniently located an hours drive in the direction home.

Posted on March 3, 2014 by Sander Berkouwer in Community, Personal