First signs of the XPocalypse… 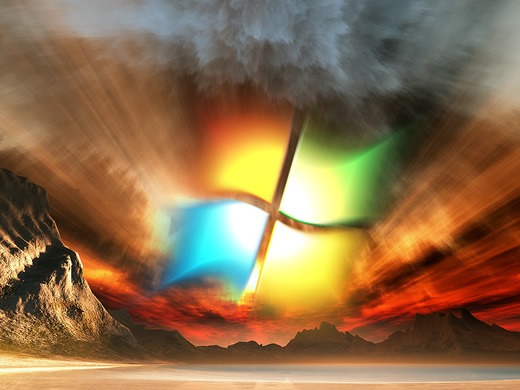 The world, as a lot of people know it, is coming to an end on April 8, 2014: They’ll be cut off from the world, left out in the cold, doomed to live in a world of lawlessness and trapped in wars between good and (don’t be) evil.

Note:
I’m not talking about the religious end of time, but the end of support for Windows XP on April 8, 2014, commonly referred to as the XPocalypse.

Having left the world Windows XP on one the earliest betas of Windows Vista, I didn’t really take notice of the world of pain a lot of people still on Windows XP would have to endure. I posted a list of actions to perform when you want to keep on using Windows XP and thought that would’ve put IT administrators off of their plans to force this 12 1/2 year old Operating systems onto their end users.

Apparently, I was wrong.

I visited a tradeshow earlier this week, where I spoke to some (former) health professionals. Whenever I mentioned I was into Microsoft, I would get the strangest replies:

The end of support of Windows XP is a marketing move by Microsoft, which helps the sale of Macs.

I can no longer send e-mail through my Gmail account, when I’m on Windows XP. It’s not event April 8, yet!

Now, the last reply was a situation unknown to me, so I decided to investigate the situation.

In my exchange messages with the person telling me of this situation, I found out the person had no trouble creating, sending, forwarding and replying to messages on devices running Windows 7. His older Windows XP-based device was another story. He could not send mail on it. Also, he experienced the same behavior on the devices that one of the bigger hospitals in the region, offers to visitors to use. You’ve guessed it: Windows XP too.

Now, I’m guessing the hospital is conducting some strange research on how much abuse a visitor is willing to take. I can’t find another reason why they’d be insulting and exposing visitors to Windows XP…

Then, I turned to Google support. I looked into their browser support. They don’t offer any specific information for the consumer-grade GMail service, other than:

You can access Gmail through the Internet on browsers like Chrome, Firefox, Internet Explorer, and Safari on your computer.

In general, Gmail supports the current and prior major release of Chrome, Firefox, Internet Explorer and Safari on a rolling basis.

For its business users, Google does go into more detail on supported browsers for Google Apps:

It is a very recent problem too, since people on Google’s product forums, only started noticing this behavior beginning March 21st.

Apparently, Google wants people to use recent browsers and has found a way to lock out the hordes of loyal Windows XP users: Since Windows Internet Explorer 8 is the latest version of Internet Explorer they can upgrade to on Windows XP, they’ll need to get sucked into the Google ecosystem and use Google Chrome on their Windows XP-based devices.

For the visitors of the aforementioned hospital, using their locked-down visitor PCs, no cure is available.

Time will tell if Google’s decision to lock out Windows XP users, using their default browsers, is a good thing.

On the other hand, if Windows XP-based devices collectively change into botnet zombies on April 9, 2013, Google might just have saved our inboxes from loads of unsolicited messages (if you’d believe malware would actually use the GMail website)…

So you want to continue using Windows XP?