In a blogpost today, Tal Be'ery, Vice President Research at Aorato, an Israeli security company consisting of veterans of the Israeli Defense Forces specializing in Active Directory, published how weak encryption enables an attacker to change a victim’s password without being logged.

Labeled as a vulnerability in Active Directory, this information sparked some controversy, so let’s dive into it.

Tal Be'ery and his colleagues at Aorato have found a way to use harvested NTLM hashes in RC4-HMAC-MD5-encrypted Kerberos sessions, based on the backward compatibility information in RFC 4757. Section 2 of this RFC states that “The key used for RC4-HMAC is the same as the existing Windows NT key (NT Password Hash) for compatibility reasons.” 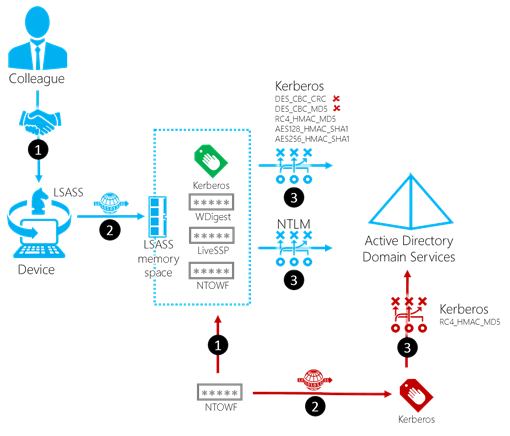 The attack process is depicted in the picture above, where blue items represent the legitimate processes and traffic and red items represent the attacker’s steps. After a colleague logs in with his/her user account (1), LSASS on his/her device creates hashes corresponding with its plugins (2), using, among other methods, the NT One-Way Function (NTOWF) to create the NTLM hash. When signing on to network resources, the appropriate plugin is accessed to provide the hashes, and tokens needed, without the colleague being prompted for credentials (3).

About LSASS and LSASS Protection

As you might recall in my last blogpost covering LSASS protections in Windows 8.1 and Windows Server 2012 R2, I detailed how LSASS uses plug-ins per Security Support Provider (SSP) and how these create hashes using its one way hasing algorithms. I also detailed a new feature called LSASS Protection when you’re running Windows 8.1 or Windows Server 2012 R2, that protects the LSASS Memory Space and does not store all hashes in it.

When NTLM was introduced with Windows NT in 1993, processors weren't fast enough to reliably and unnoticeable hash values with more than DES or 3DES. Despite inherent weaknesses, todays processors can brute force the original value pretty easily.

This, indeed, is a cat and mouse game. From a Kerberos authentication type point of view, Microsoft has disabled DES-CBC-CRC and DES-CBC-MD5 for Kerberos encryption from Windows 7 and Windows Server 2008 R2 onwards, by default.

Could RC4-HMAC-MD5 be the next in line to bite the dust?

Mitigating this type of attack

This attack method is made possible by three factors:

The second factor is not something that can be easily changed, but as Active Directory admins, we can address the other two factors:

Another way is to upgrade to Windows 8.1 and Windows Server 2012 R2 to gain the LSASS Protections.

As Ned Pyle pointed out, in a blog post on the Ask the Directory Services Team blog on Hunting down DES in order to securely deploy Kerberos, you can scan the network for Kerberos encryption types. This makes it easy to see which systems still rely on the older backward-compatible RC4-HMAC-MD5 encryption scheme.

When it’s not in use, you can safely disable it using the information on Windows Configurations for Kerberos Supported Encryption Type on the Microsoft Open Specifications Support Team Blog through the Network security: Configure encryption types allows for Kerberos Group Policy: 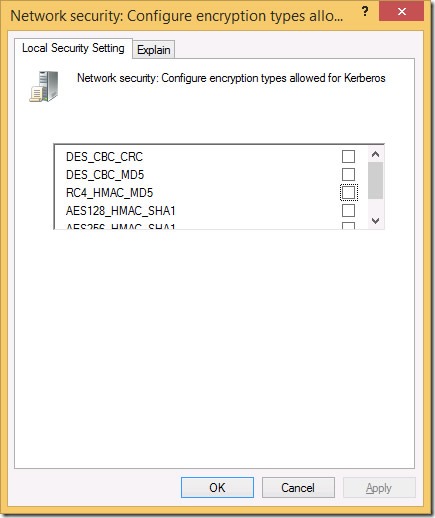 To prevent Kerberos impersonation using NTLM hashes leveraged in RC4-HMAC-MD5-encrypted Kerberos, apply this Group Policy setting to all the computer objects in the Active Directory environment. For the purpose of merely preventing password changes with this method, apply the Group Policy setting to all Domain Controllers, as outlined by Microsoft in its TechNet page on Preventing Kerberos change password using RC4 secret keys.

Note:
Implementing Protected Users can be hazardous. Active Directory admins can shut themselves out, be unable to troubleshoot delegation effectively. Colleagues may need to change their passwords before protections may kick in.

One of the (non-configurable) protection mechanisms that are part of membership of the Protected Users group is limiting the Kerberos encryption types to AES128 and AES256.

It's not the Pass-the-Hash stuff that's interesting to me in Aorato’s Active Directory vulnerability. It's what they're using the hash for; instead of using it for lateral movement or privilege escalation, they're using it to get a valid (weak) Kerberos token to change the password for the affected user with.

Microsoft offers this functionality for backward compatibility, but perhaps they shouldn't need to anymore in a next version?