For its February 2015 Patch Tuesday on Tuesday February 10, Microsoft has released two security bulletin to address issues in Group Policy that would allow an attacker using a Man-in-the-middle (MitM) approach to bypass security policies, by forging packets sent by Domain Controllers.

In many organizations, Group Policies are used to centrally configure settings, printers, drivers and software.

These settings and preferences can be applied locally using gpedit.msc and secpol.msc. However, settings and preferences can also be set centrally using Active Directory on the site, domain and even granularly per Organizational Unit (OU). Tools used are gpmc.msc and, again, gpedit.msc. For non-domain-joined devices, the Security Configuration Manager (SCM) Solutions Accelerator and Offline Domain Join (ODJ) can be used to configure settings.

Responsible for applying security settings from both the local computer security policy and Group Policy objects on a device, is the Security Configuration Engine. It receives and applies the policy data in policy files and makes sure they get applied.

Multiple issues exist with Group Policy that can be used to cause undesired behavior:

First, an issue has been identified in the way how the Security Configuration Engine picks up Group Policy.

An attacker may spoof, tamper with, or redirect communications between the UNC provider and devices, and subsequently may be able to cause Group Policy to execute his or her programs or scripts. A common attack vector for this would be for an attacker to introduce a rogue Wi-Fi access point connected to the corporate wired network, optionally configured with the same SSID as the corporate Wi-Fi.

An attacker can achieve this by modifying the responses sent by Active Directory Domain Controllers with a Man-in-the-Middle (MitM) approach. The behavior of the Group Policy Security Configuration Engine, then, is to apply default, potentially less secure, group policy settings, instead of the domain-configured settings.

Microsoft introduces UNC Hardened Access to address this vulnerability. This is a new Windows feature, that provides mitigations against Man-in-the-Middle attacks for any UNC paths that host executable programs, script files or files that control security policies and improves the protection and handling of data when Windows-based devices access UNC paths.

An update is available from Microsoft that address this vulnerability, by correcting how Group Policy settings are applied when a Group Policy Security Configuration Engine policy file is corrupted or otherwise unreadable.

Behind the Show… button, define shares and their UNC Hardened Access behaviors: 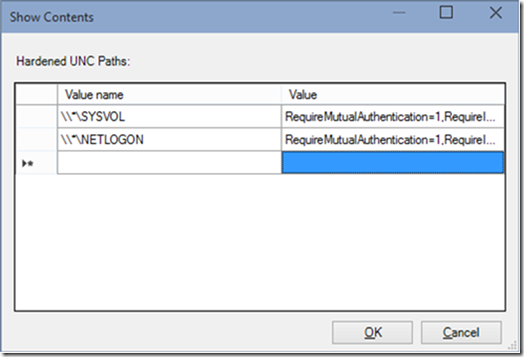 Test both the update and the configuration in a test environment, to assess the risk and possible impact on your production environment and then, roll out this update to all devices within scope. After that, configure the additional Group Policy Settings.

Microsoft has not identified any mitigating factors or workarounds, so I urge you to install KB3004361 in a test environment as soon as possible, assess the risk and possible impact on your production environment and then, roll out this update to all devices within the Active Directory environment.