Microsoft has introduced an impressive array of technologies and an awesome vision on Hybrid Identity:

While Microsofts Azure Active Directory Hybrid Identity Design Considerations document details a lot of pitfalls you might want to avoid while implementing Microsofts Hybrid Identity technologies in the areas of process and architecture, my projects, on the other hand, have shown technical customer configurations beyond belief.

In this series I’ll detail these configurations, how they ruin Hybrid Identity dreams and how to fix them.

This is a scenario that I encountered at a customer with roughly 140 DNS domain names and 70 DNS domain names registered as federated domains in Azure Active Directory. One of the things I noticed, is that it is pretty hard to find UPN Suffixes and manage them adequately, resulting in the below type of misconfiguration.

Admins in Azure Active Directory can define domains. This way, they can claim their publicly routable DNS domain names and append them as suffixes to online-only account userPrincipalNames. Effectively, they are UPN Suffixes.

Note:
Publicly routable in the context of Hybrid Identity means it needs to have a top-level domain part that is on the list of Internet top-level domains. It is a big plus when this is a domain that is actually registered and owned by your organization.

For the above to work, DNS domains need to be validated through DNS. MX records and TXT records with specific values can both be used to this purpose and Microsoft offers assistance for all large domain name registrars.

Domains in Azure Active Directory can be three types:

In on-premises Windows Server Active Directory Domain Services implementations, admins can also define domains, either as part of an existing forest, or as part of a new forest. Per forest, userPrincipalName Suffixes can be added to the UPN Suffix list, which by default, contains the DNS domain name of the domain itself.

UPN Suffixes in on-premises Windows Server Active Directory Domain Services do not need to be publicly routable. Only if you intend to use them with federation and/or Hybrid Identity they need to be.

The entire story above results in the situation depicted below: 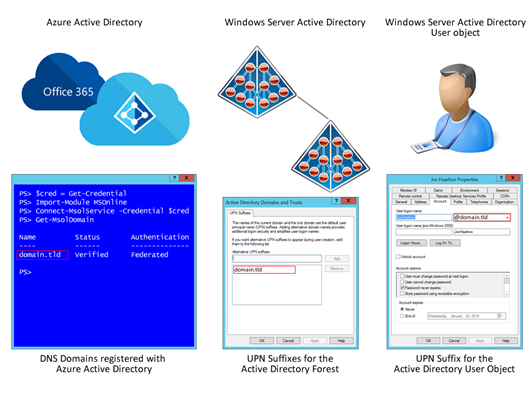 Note:
Configuring Alternate Login ID negates the requirement for having a publicly routable UPN Suffix, but will result in certain scenarios of the Hybrid Identity vision being unavailable.

One of the problems you might encounter, especially in migration scenarios, is that you can remove UPN Suffixes using Active Directory Domains and Trusts (domain.msc), but this will not remove or reset the UPN Suffix in the userPrincipalName for the user accounts configured with them.

This may result in what I call an orphaned UPN Suffix configured for user accounts.

Then, on the Monday after the implementation, a lot of people might not be able to enjoy the benefits of Hybrid Identity, because a lot of user objects might have orphaned UPN Suffixes…

Together with a little help from Ben Gelens and Mark Scholman, colleagues at INOVATIV, and some invaluable help from Jeff Wouters, I created a script that enumerates the UPN Suffixes in your  Windows Server Active Directory environment and Azure AD DNS Domains. Then, it’ll go through the user objects and detect:

Equipped with the information from the script you know the exceptions to the list of UPN Suffixes for the Windows Server Active Directory Forest. You can be conclusive of the DNS Domains to register and federate and set priorities in your migration and/or implementation process accordingly.