From the Field: The Case of the Unreanimatable Tombstone Objects

Today, I saw someone stress over an ‘Oops!’ situation that occurred straight after a long Exchange to Office 365 migration weekend, that, as a consequence, went sour all of a sudden. Thinking he was doing the right things, the person actually made it worse. But, it’s a long story, so let’s begin at the beginning.

After a long migration weekend, involving a Microsoft Exchange to Office365 migration and Azure AD Connect for Hybrid Identity, someone on the project team accidentally deleted an entire Organizational Unit (OU) in Active Directory Domain Services. By the time the error was detected, Azure AD Connect had synchronized the changes and orphaned the Office365 mailboxes for the deleted user accounts…

Getting the objects back, then, would pose a challenge. Not for these guys, because they use Veeam Backup & Replication with the Veeam Explorer for Active Directory.

Veeam Backup & Replication offers ground-breaking restore possibilities, based on a single (incremental) backup file. The Veeam Explorer for Microsoft Active Directory is a feature that allows for object-level restores in Active Directory, based on the same single backup of any Domain Controller.

To this purpose, Veeam Backup & Replication creates an isolated environment to which it restores the Domain Controller, plus a Veeam interface to restore objects to the production Active Directory Domain Services environment.

After verifying successful replication of enabling the Active Directory Recycle Bin, he started up Veeam Backup & Replication and restored the affected objects using the Veeam Explorer for Microsoft Active Directory.

To his loud dismay, Veeam created objects with new Security Identifiers (sIDs), instead of properly restoring objects with their original sIDs, as he expected from the documentation and previous experiences.

Looking up to an enormous amount of work to hard match the new user objects with the orphaned mailboxes, correcting profile issues, etc. the person asked me for advice.

Now, of course, I know the Veeam Explorer for Microsoft Active Directory is not as bad as the person would have me think.

Let’s look at what happens when we enable the Active Directory Recycle Bin, introduced with Windows Server 2008 R2, first. 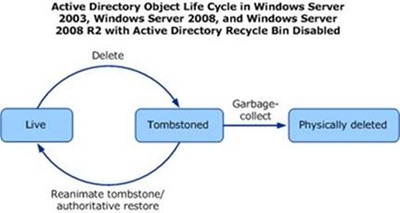 In an environment that doesn’t have the Active Directory Recycle Bin enabled, an object that is deleted becomes tombstoned for the period of the tombstone lifetime. This makes sure Domain Controllers have the opportunity to replicate this change. As part of the tombstoning process, the object is stripped from all link-valued and non-link-valued attributes, so the object doesn’t appear as a group member, etc. After the Tombstone Lifetime Period, the locally running garbage collection process deletes the tombstone object from the database, on each Domain Controller separately.

After the Active Directory Recycle Bin feature is enabled, the deletion process for objects changes, significantly, as the above figure shows:

These changes result in a couple of situations, as documented by Microsoft:

How the Veeam Explorer for Microsoft Active Directory works 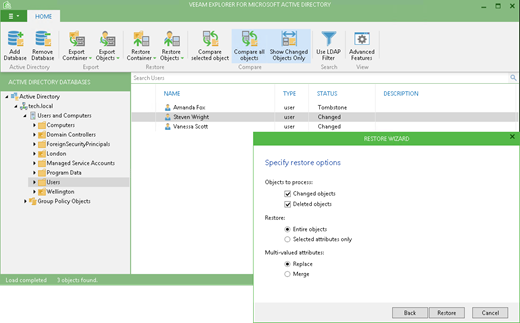 Now, let’s look at how the Veeam Explorer for Microsoft Active Directory works, from a functional perspective. In Veeam’s support forums, we found the following gem of information:

In case you need to restore an object then Veeam looks for it either in a tombstone container or in a recycle bin (in your case that would be a recycle). If nothing's found then Veeam needs to restore the object from backup. If you restore the object from a backup then your GUID and SID will change. In case of a tombstone/resyscle restoration GUID and SID do not change.

Microsoft’s documentation already points to the solution. Authoritatively restoring the objects should bring them back with their original sIDs.

We first deleted the objects that we created using Veeam Explorer for Active Directory, to avoid duplicate objects. Then, again, Veeam Backup & Replication helped in this case. We performed an authoritative restore for the Organizational Unit (OU) from backup, using the following commands in Directory Services Restore Mode (DSRM):

Tip!
Can’t get into the Directory Services Restore Mode (DSRM), because the startup option is missing on your Domain Controller? Follow these instructions.

This resulted in objects with original sIDs, and no more orphaned mailboxes, profile issues, etc.

Under the hood, Active Directory works in mysterious ways. Understanding how it works, makes your life easier and your choices better.