Microsoft has introduced an impressive array of technologies and an awesome vision on Hybrid Identity:

While Microsofts Azure Active Directory Hybrid Identity Design Considerations document details a lot of pitfalls you might want to avoid while implementing Microsofts Hybrid Identity technologies in the areas of process and architecture, my projects, on the other hand, have shown technical customer configurations beyond belief.

In this series I’ll detail these configurations, how they ruin Hybrid Identity dreams and how to fix them.

This is a scenario I experienced myself, and I think this is a limit a large organization may run into.

When Active Directory shipped with Windows 2000 Server, it came with group membership limits of 5,000 members. In the Windows Server 2003 Forest Functional Level (FFL), this limitation was lifted with the introduction of link-value replication (LVR).

To enable this feature, the Active Directory Forest Functional Level (FFL) needs to be at least Windows Server 2003 interim and any groups expecting to hit the 5,000 limit, need to be cleared of their memberships. After that, the members can be added back to change the way of replication.

So far, testing in this area has yet to reveal any new recommended limits to the number of members in a group or any other linked multivalued attribute. Production environments have been reported to exceed 4 million members, and Microsoft scalability testing reached 500 million members.

The 50,000 group membership limit applies to:

The limit does does not apply to:

Indications of hitting the limit

When the group membership limit is hit, the Azure AD Connect Sync Engine will stop synchronizing to Azure Active Directory.

In the Application log of the Windows Server on which Azure AD Connect is installed and running, you’d find Event ID 107 errors with source Directory Synchronization, and Event ID 6803 with source AD Sync, along with several other events. 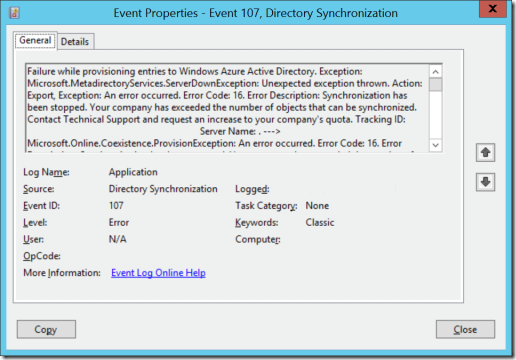 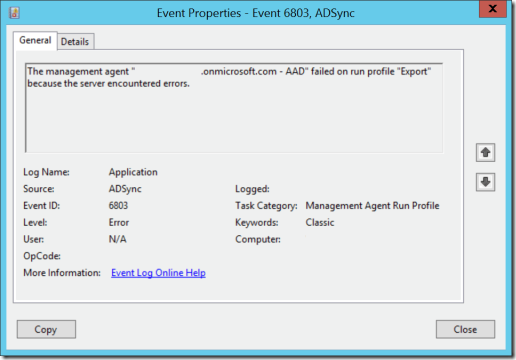 When you drill down into the flow error for the latter, you’d see a mention of the sync-rule-error-function-triggered for the Connector Space Object Properties of the group that is causing the error. 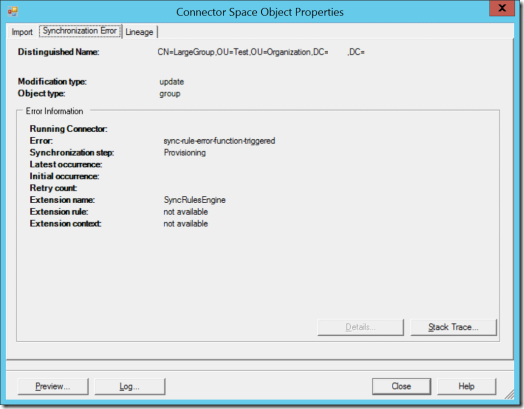 Ways to circumvent the limit are:

You will need to contact Azure support to get the situation fixed.
Support request can easily be initiated through the Help and Support section of the Azure Portal.

While you can solve all the other warnings, errors, etc., the Azure Active Directory connector will remain broken and report stopped-server-down.

The situation feels comparable to Active Directory Domain Controllers that suspects replication partner(s) of UPN Rollbacks. They will turn their back and not replicate anymore. We know how to deal with that situation, but we don’t have the ability to run repadmin.exe on Azure Active Directory.

Thus, preventing the situation from happening is preferable to detecting and then getting the situation solved by Azure support, especially when you have people from higher management breathing in your neck to solve synchronization fast and questioning Microsofts Hybrid Identity strategy in the process.

Use the PowerShell script below to detect groups in the on-premises Active Directory environment, the machine you run it from, is joined to:

When you suspect your on-premises Active Directory Domain Services environment(s) have groups with more than 50,000 or more members, it’s a good idea to know the Azure Active Directory group membership limit up front.