The company I work for has implemented Microsoft Exchange Server 2013 and Microsoft Lync Server 2013. To complete the Unified Communication Collaboration enviroment, I was asked to setup a Microsoft Sharepoint Server 2013 environment. To quote Jeremy Clarkson from TopGear:

How hard can it be?

The business provided me with the following requirements:

The business provided me with the following resources:

Now, let's proceed to guide you through setting up a Microsoft SQL Server 2012 AlwaysOn Cluster for Sharepoint Server 2013/any other application.

Part one – Prepare the VMs with Windows Server 2012

These are the hotfixes that you might need to install on your windows 2012 servers that will participate in the AlwaysOn cluster:

Before installing the above hotfixes, I installed a few roles on both servers with this PowerShell Cmdlet:

After you have completed this installation of roles, you can proceed to join the server to your company's Active Directory.

Once you joined the servers that will host SQL Server 2012 onto your domain, you must reserve 4 internal IP adresses for your SQL Server Cluster. In my case, I'm planning on using two servers for the SQL Server AlwaysOn setup.

Because we want AlwaysOn, we need to pay for it. AlwaysOn is a feature found only in SQL Server Server 2012 Enterprise.

Note:
Other versions of SQL Server 2012 do not have this feature! 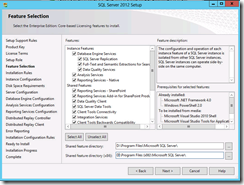 In my case, I decided to install all features of SQL Server 2012. Now, let's continue with the rest of the installation: 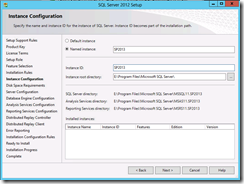 I decided that I want to use a Named instance, because this SQL Server AlwaysOn cluster will host many more instances and I want to keep things separated from each other. 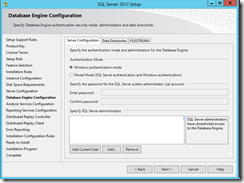 At this part of the setup I choose Windows Authentication mode as the authentication mode. I add a security group that I just created for this purpose. IMHO, domain admins are not database administrators (DBAs)! Once you are finished with adding the correct security group, you must proceed to the "Data Directories" tab. Here you will split the SQL Server database files from the log files.

Microsoft and a lot of DBA's around the globe, recommend to keep log files (.ldf) on a different partition than the SQL database files (.mdf). Please excuse my screenshot. On the actual setup I have separated the logs and the database files.

If you are happy with the settings, you can continue with the setup. I will provide a few more screenshots for the sake of this blogpost. 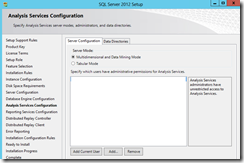 The same recommendations can be applied here. Add a security group instead of a single user and use different partitions to host the files that Analysis Services will use.

At this point I select "Install and configure"

At this point you must provide a user or users access to the DRC. It's best to consult with your DBA, which users are allowed to have permissions to the DRC.

You can use the default settings.

We are done configuring the initial setup of SQL Server 2012. Click on "Finish" and watch the progress bar completing. In a few minutes you will have a working SQL Server 2012 setup.

Friendly reminder:
You must repeat this installation sequence on the second/third/fourth SQL server that will join the AlwaysOn group.

I hope this first part of this blogpost server has helped you to install SQL Server 2012 Enterprise on one or more servers. The setup process is quite easy if you are planning to host an AlwaysOn group. In the second blogpost I will guide you through the setup of your first AlwaysOn group. I will explain the pitfalls that I have encountered during my first AlwaysOn setup. The deployment of an AlwaysOn environment is quite easy, once you know how to do it. I'm here to help you along and to spare you countless hours of reading and troubleshooting.

Posted on November 25, 2013 by Sergio Kappel in Sharepoint