Microsoft Exchange Server 2007 has a new trick up its sleeve in combination with Microsoft Office Outlook 2007 and Windows Mobile 6: Exchange AutoDiscover Service. You can use this feature with your Domain Naming System (DNS) implementation, but this feature is even more functional when used in conjunction with Active Directory.
(Just like everything you use in your daily life…)

Microsoft introduced the marketing phrase "better together" for Microsoft Office Outlook 2003 and Microsoft Exchange Server 2003 and they told us Knowledge and Information Workers could benefit from increased performance and availability features, like:

With Microsoft Office Outlook 2007 and Microsoft Exchange Server 2007 the phrase "Better together" gets reused. The dust is blown off, it got a good polish and it looks like brand new! This time Microsoft uses it to sell the new featureset, including: 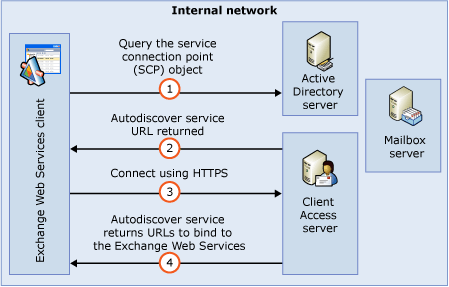 Let's look into each of the server-side components that make up the AutoDiscover Web Service a bit closer:

You can also make a DNS A record in your Forward Lookup zone within your DNS Management MMC Snap-in (dnsmgmt.msc) pointing to the IP address of your Microsoft Exchange Server. The name of this record would be autodiscover.

Using Active Directory Integrated DNS in your enterprise organization makes this task easy: The changes you make in DNS will be replicated through your organization without a hitch and in a multi-master manner.

If you want to enable Microsoft Windows Mobile 5.0 MSFP or Windows Mobile 6.0 devices and Outlook Anywhere clients you should also make a DNS A record in your public Forward Lookup Zone, resulting in a autodiscover.youremaildomain.com DNS record pointing towards a public IP address where you'd make the AutoDiscover IIS Virtual Folder available through HTTP over SSL (HTTPS) and make sure you publish it with a valid SSL Certificate to avoid unnecessary errors. 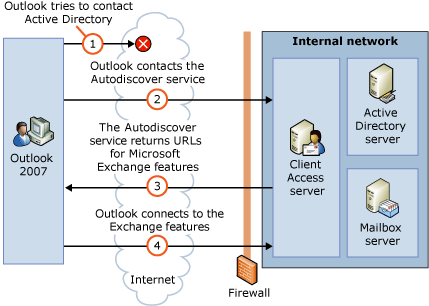 Besides the cmdlets to configure individual AutoDiscover Virtual Directories there are four cmdlets that grant you the ability to manage the AutoDiscoverConfig object under the Global Settings object in the Active Directory directory service. These are New-OutlookProvider, Remove-OutlookProvider, Get-OutlookProvider and Set-OutlookProvider. These settings can also be managed using AdsiEdit.msc from the Support Tools if that is your preferred way of editing the Exchange Organization within Active Directory, but I must admit that the more granular way of granting permissions in Exchange Server 2007 appeals to me more.

Last but not least the Set-ClientAccessServer CMDlet offers you the chance to enter the AutoDiscoverSiteScope option to define for which Active Directory sites the Autodiscover service is authoritative.