Last time I took a look at Hyper-V Server 2008 R2 Beta, I shared the surprise of having Failover Clustering and the possibility to have highly available virtualized workloads on it.

This time I look at an implication of having the Windows Enterprise-like Quick Migration and Live Migration features: increased complexity and configuration burden.

In Hyper-V Server 2008 and Server Core Installations of Windows Server 2008 to connect to SAN storage you would use the iscsicli.exe tool. This is the command line equivalent of the iSCSI client configuration tool. This command line tool requires you to utilize your asterisk button a lot. (to accept default values)

Typical commands to connect to your SAN storage look like these:

Not really intuitive, but when you’ve read the Microsoft iSCSI Software Initiator User's Guide and have memorized Appendix C of the document you’re basically ready to go.

To make this crucial step in your cluster setup progress a bit easier, Microsoft has included the graphical version of the iSCSI client configuration tool in Hyper-V Server 2008 R2 and Server Core installations of Windows Server 2008 R2. You no longer have to work iscsicli.exe magic to connect to your SAN; you can click your way through now! Of course, for die hard command line freaks and scripters of all sorts the iscsicli.exe command is still available!

The graphical version of the iSCSI client configuration tool can be started by typing:

Below is a screenshot of a Hyper-V server 2008 R2 installation running the graphical version of the iSCSI Client: 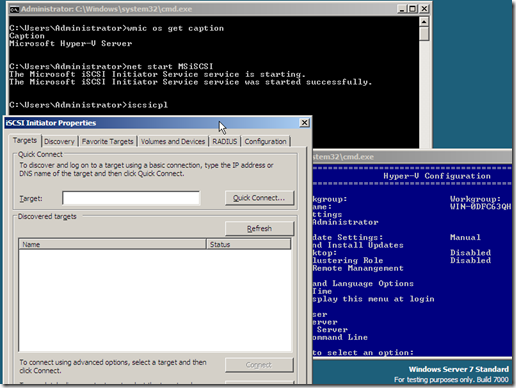 Although the name implies otherwise this is not a Control Panel applet like timedate.cpl and intl.cpl. Trying to start the graphical version of the iSCSI Client using control iscsicpl will not result in a running instance.

For proper operation the Microsoft iSCSI Initiator service should be running. When the service is not running you will be asked whether you want to service to be automatically be started every time the computer starts:

You can also achieve the services starts by typing the following two commands:

Some configuration tasks can be tricky on a GUI-less server. In Hyper-V Server 2008 and Server Core installations of Windows Server 2008 a couple of graphical windows were present. These allowed to configure Regional options and Time and Data options.

One Response to iSCSI configuration in Hyper-V Server 2008 R2