Last night, during SuperBowl XLVIII, a version of Windows 8.1 Update 1 was, inadvertently, released to the web. While this release focuses on the integration between Windows Phone and Windows for the desktop, laptop and tablet, it also features a slew of User Interface (UI) improvements for those still on the fence on The New Interface (previously referred to as ‘Metro’).

I’ve had some time to look into this build on non-touchscreen enabled devices.
Here’s my view on it:

A lot of people I talk to, are still on the fence on The New Interface and its Start Screen, that was introduced with Windows 8. Most of these people use non-touchscreen enabled devices. While Windows 8.1 introduced a couple of tweaks that might help IT departments with the user adoption of their deployments, but inefficiencies, obviously, remained. 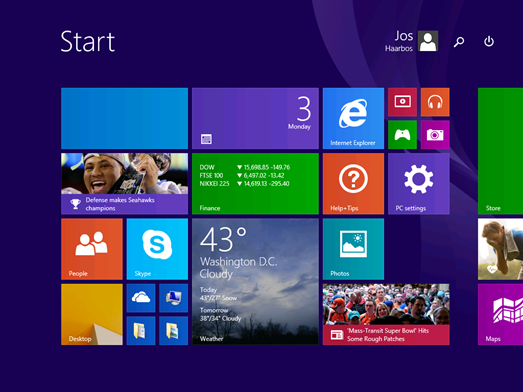 Windows 8.1 Update 1 offers four Start Screen improvements for point and click aficionados. Two of these changes are visible right off the bat: 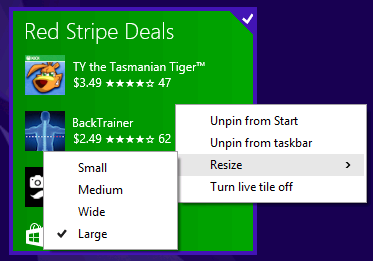 While the majority of the options in the context menu were available in Windows 8 and Windows 8.1, the Pin to taskbar and Unpin from taskbar are new to Modern Apps.

Note:
The Windows Store App was pinned to the Desktop Taskbar, by default.

When you select multiple apps, the Clear selection option is also available from the context menu. It seems the App bar for the Start Screen is gone in Windows 8.1 Update 1.

Throughout The New Interface, the Windows team also made some tweaks. For every Modern App, there’s now a Title bar, displaying the apps icon, its title and a close button when you move your mouse pointer towards the top of the Modern App: 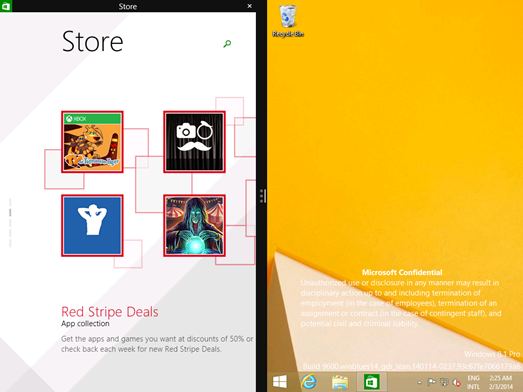 You can pick the app up by its Title bar and snap it (like in the above screenshot). When you pull it down or when you close the x in the top right corner, it will close the app as it would in Windows 8.1.

Note:
As with Windows 8.1, the close button does not end the app, but merely closes it. It still shows in the Task Manager. It will not show up when you use Alt + Tab to switch between apps, though.

As we’ve already seen in the Start Screen improvements, you can now pin Modern Apps to the taskbar on the Desktop. By default, the Store App is pinned to the taskbar: 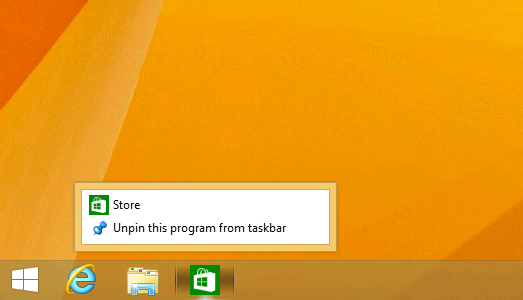 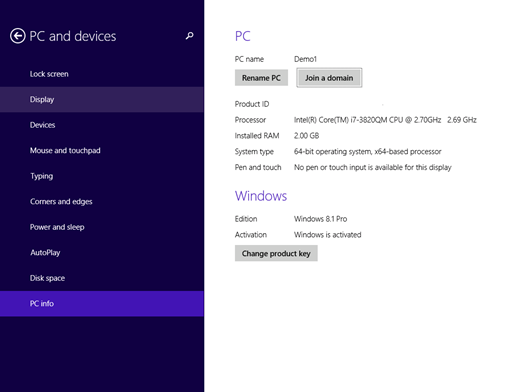 To use this feature, start the Charms Bar by swiping into the screen from the right, by moving the mouse in the top right corner of the screen and then down, or by pressing Win + C. From the Charms Bar, select Settings and then Change PC Settings. In the left pane, select PC and Devices and then PC Info. The button to Join a domain is new.

Windows 8 Update 1 doesn’t make Modern Apps on non-touch enabled devices as intuitive (and windowable) as Desktop Apps, but the Windows team is moving towards ‘fixing’ the issues desktop users have with the Start Screen and Modern Apps.