Back in Windows Server 2008 R2, Managed Service Accounts (MSAs) solved the problem of unsecure service accounts. Managing them was a nightmare, even if you knew what you were doing. Now, In Windows Server 2012, Microsoft addresses a couple of these challenges This blogposts shows how.

We all use service accounts in our environments. These accounts allow us to run a service with the right amount of privileges. It also allows us to change the passwords for normal accounts, since these are not abused to run services.

It offers a big benefit: just like with a computer account and the typical local system accounts, the managed service account will automatically change it password regularly. IT can also update its Service Principle Name (SPN) automatically.

From a security point of view, this means, in a worst case scenario, a sniffed (and decoded) password(hash) can only be used for a limited amount of time. It also means that when the account is only given the barely minimum privileges, an attacker cannot exploit a vulnerability in the service, beyond the service itself.

From a management point of view, it means you can create automatically changing service accounts per service per host. After renaming the host, the service will start like it did before.

Note:
While creating a Managed Service Account is also possible using Active Directory Users and Computers (ds.msc), this is not the ideal way to create these accounts.

Then, to assign the Managed Service Account to a host, the following PowerShell command would be used:

As a last step, install the Managed Service Account on the host, that hosts the service, in this case Host1:

After this third step you can configure the service to run using the managed service account in the Services MMC Snap-in (services.msc).

gMSAs provide the same functionality as MSAs within the domain but also extends that functionality over multiple servers. When connecting to a service hosted on a server farm, such as IIS Network Load Balance farms, Exchange DAG members and SQL Failover Clusters, the authentication protocols supporting mutual authentication require that all instances of the services use the same principal. When group Managed Service Account are used as service principals, the Windows operating system manages the password for the account instead of relying on the administrator to manage the password.

gMSAs provide a single identity solution for services running on a server farm, or on systems behind Network Load Balance. By using gMSAs, services can be configured for the new gMSA object and the password management is handled by Windows.

To be able to work with group Managed Service Accounts, first, the Key Distribution Services needs to be turned on on the Domain Controllers. This is a two-step procedure

First, you need to check whether the service is configured correctly on your Windows Server 2012-based Domain Controllers. For this, open the Active Directory Sites and Services MMC Snap-in (dssite.msc) and in the View menu check the Show Services Node option.

Note:
Although the command specifies the Root Key to be effective immediately, you will actually have to wait 10 hours for it to become active. This ensures there is ample time to replicate the information to other Domain Controllers.

The command will output a Generally Unique Identifier (GUID) for the new Master Key. The new key should be visible with this GUID as its name in the Master Root Keys node under the Group Key Distribution Service node in Active Directory Sites and Services.

You will only need to create this first step once.

When you want to dynamically scope the gMSA, it’s a best practice to use a group. You can specify hosts allowed to consume the gMSA when you create the gMSA, but it’s easier to create a group and make the servers a member of the group.

Note:
The servers need to be rebooted afterwards to pick up their new group memberships.

To create a group Managed Service Account use the following PowerShell one-liner:

Note:
By default, a gMSA will change the password every 30 days, as defined in the msDS-ManagedPasswordInterval.

Step 4: Enable the gMSA for use on the hosts

On the host that hosts the service, execute the following command to make the gMSA available for selection in the Services MMC Snap-in (services.msc):

Step 5: Specify the gMSA as the service account on the hosts

Now, in the Services MMC Snap-in (services.msc), specify the group Managed Service Account as the service account for the intended service: 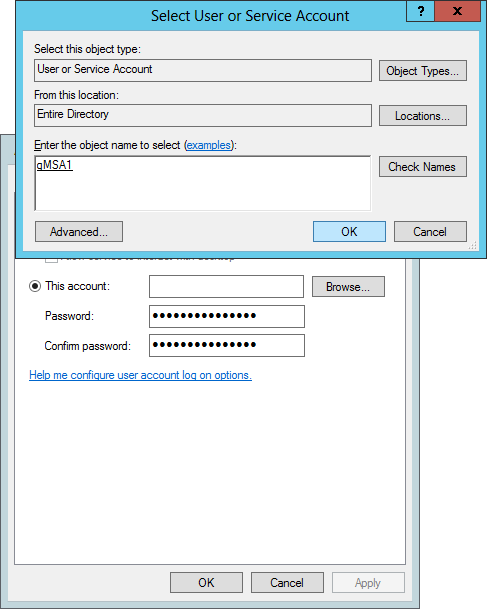 In order to create and use group Managed Service Accounts (gMSAs), you will need to meet the following requirements:

Unfortunately, to manage gMSAs you will still need to type away at the PowerShell command-line. For this feature, no Graphical User Interface (GUI) was created in the Active Directory Administrative Center (yet).

Also, if your goal is to create a ‘normal’ MSA, you need to adjust your PowerShell scripts to target these specifically.