Offline Domain Joins use useful when you want to join a computer to an Active Directory infrastructure without the need for direct communication between the client and a Domain Controller. These include:

Although Offline Domain Join can be used to join computers to a domain without a direct connection to an Active Directory infrastructure, at one point a domain-joined computer needs to connect to a Domain Controller on a regular basis to stay a part of the Active Directory infrastructure. (unless you want to spend the rest of the lifetime of the domain-joined computer feeding it offline domain join information…)

Offline Domain Join has been extended by allowing the blob to accommodate Direct Access prerequisites:

This means the number of scenarios increase. One of the main scenarios that now gets included is deploying domain-joined computers to DirectAccess users. The clients now have everything they need to successfully connect to the DirectAccess server(s).

Let’s look at the individual steps of the process:

Now, In situations where you’d want to include Root Certificates, Certificates or Group Policies in the blob, extend the command above with the following extra switches:

An example of such a command would be:

This command, when successful, creates the in the location specified. This file, which can be given any file extension is a Base64-encoded file, containing all the necessary information for a Windows 7 client to join the Active Directory domain.

When you open the file and pull it through a base64-decoder (like this one) the contents of the file become clear.

Let’s take a look at the Offline Domain Join blob we created in step 1 for Win803 in the domain.local domain: 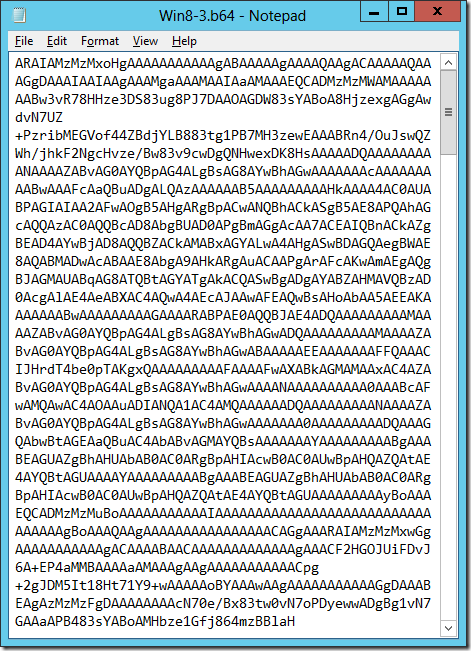 This file doesn’t really provide any insight into how Offline Domain Join works its magic, but as mentioned earlier, the Offline Domain Join (ODJ) blob is a base64 encoded file. This means we can put it through a Base64 decoder like this one, or convert it using one of the many online base64 decoders. This will result in outcome similar to the text file below: 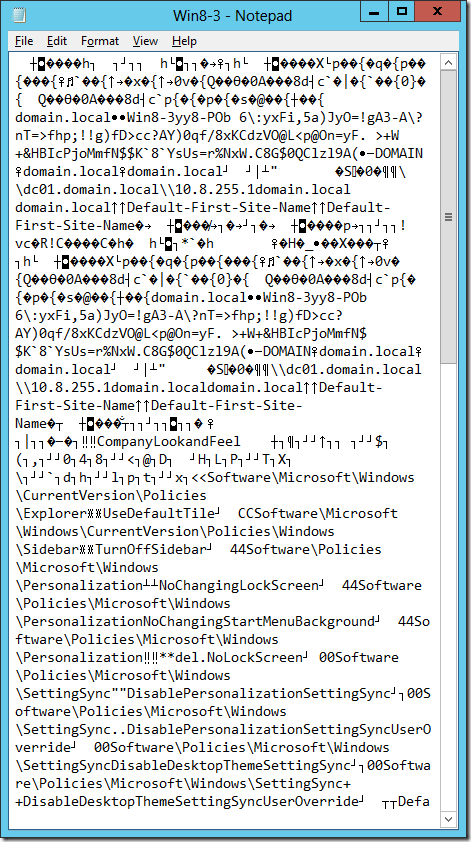 As you can clearly see, the decoded file contains the information you’d suspect a client needs to join the domain. The decoded file contains the DNS domain name (domain.local), the workstation NetBIOS name (Win8-02), the computer password, the NetBIOS domain name (DOMAIN), the name of the Domain Controller (DC01.domain.local), it’s IPv4 address (10.8.255.1) and the Active Directory site. (Default-First-Site-Name). Also, it includes the policy settings in the CompanyLookAndFeel Group Policy.

The nature of the decoded file, also warrants the security note placed in the Offline Domain Join (Djoin.exe) Step-by-Step Guide:

The base64-encoded metadata blob that is created by the provisioning command contains very sensitive data. It should be treated just as securely as a plaintext password. The blob contains the machine account password and other information about the domain, including the domain name, the name of a domain controller, the security ID (SID) of the domain, and so on. If the blob is being transported physically or over the network, care must be taken to transport it securely.

After the Offline Domain Join blob gets transferred to the would-be client, a local administrator can join the computer to the domain in an offline fashion by typing the following command in an (elevated) command prompt:

Note:
Alternatively, you can include the Offline Domain Join blob in an unattend.xml file.

Note:
When you want to include root certificates, certificate templates and group policies, you will need to run djoin.exe on Windows 8 or Windows Server 2012.

If you want to use djoin.exe with Windows Server 2008-based Domain Controllers, use the /downlevel switch when you provisioning.