Windows Server 2016 was announced Release to Manufacturers (RTM) during the Keynote of Microsoft’s Ignite event on September 26, 2016, but wasn’t generally available (GA) for large groups of people before Wednesday October 12, 2016. 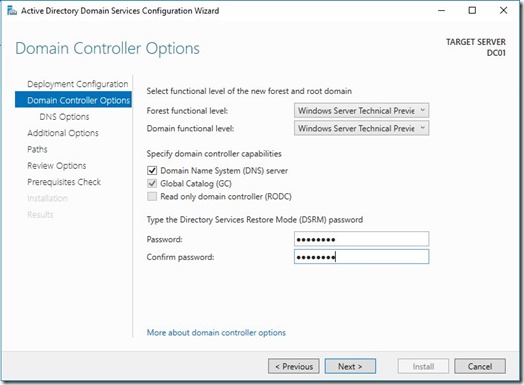 The mislabeling of the Domain Functional Level (DFL) and Forest Functional Level (FFL) in the Active Directory Domain Services Configuration Wizard is a purely graphical issue in the Wizard, caused by the absence of the first updates for Windows Server 2016.

Note:
This issue does not affect any other functionality, since the Get-ADDomain Windows PowerShell cmdlet returns Windows 2016Domain as value for an Active Directory domain configured with the Windows Server Technical Preview Domain Functional Level (DFL).

Alternatively, you can ignore the mislabeling of the functional levels in the Active Directory Domain Services Configuration Wizard, but I think we can agree that it is a recommended practice to apply available updates to Windows Server installations before installing a role, and after installing a role.