In this part of the series, we’ll look at auditing and logging settings on AD FS Servers.

Auditing and logging allow for examining the processes and services running on Windows Server installations. They allow for organizations to check the default behavior and get notified of unauthorized changes and requests.

When logging and auditing information from AD FS servers is incomplete, an organization might not have the necessary information to retrace steps of misuse and sources of origin of this misuse.

When logging and auditing information from AD FS servers is overcomplete, an organization may be swamped in irrelevant information that is not useful and may hinder the effectiveness of the admins who want to hunt misuse.

To enable auditing and logging on AD FS servers, make sure to meet the following requirements:

Make a risk analysis of the ways Active Directory Federation Services (AD FS) can be misused.

Based on the risk to mitigate, determine the level of auditing information that is needed. for AD FS in Windows Server 2016, there are three levels:

The events from the auditing levels are independent of the default options on the Events tab of the Federation Service properties, that are AD FS Farm-wide, as shown below: 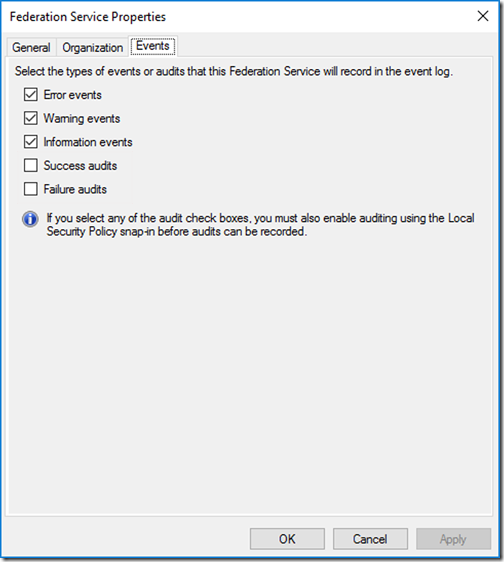 It is considered to be a recommended practice to enable Success audits and Failure audits on the AD FS Farm. For this to work, auditing should also be enabled using the Local Security Policy MMC Snap-in.

Note:
Both the above user interface to enable types of events nor the Local Security Policy MMC Snap-in are available on Server Core installations of Windows Server 2016. Therefore, we will enable these settings through Windows PowerShell.

Make sure the AD FS Servers are installed with the latest cumulative Windows Updates.

Who to communicate to

As the AD FS servers operate as part of a chain, notify all stakeholders in the chain. This means sending a heads-up to the load balancer guys and gals, the networking guys and gals, the rest of the Active Directory team and the teams that are responsible for Azure AD, Office 365 and cloud applications. It’s also a good idea to talk to the people responsible for backups, restores and disaster recovery.

When your organization utilizes a Security Incident and Event Monitoring (SIEM), Security Orchestration Automation and Response (SOAR) and/or a centralized log collection solution, talk to the people responsible for it. When AD FS is not yet onboarded, get it onboarded and perform the above risk analysis with them. When AD FS is already onboarded talk through the implications of switching between the auditing levels and enabling or disabling logging of events.

How to check the AD FS auditing level

How to enable the AD FS verbose auditing level

Repeat the above line of Windows PowerShell on each AD FS server in the AD FS Farm.

Repeat the above line of Windows PowerShell on each AD FS server in the AD FS Farm.

How to check the AD FS auditing level

How to enable logging of successes and failures

Note:
In case of Windows Internal Database (WID) as the storage method for the AD FS Configuration database, run these lines of Windows PowerShell on the primary AD FS Server.

After enabling the required levels of auditing and logging,  it’s time to test them . Everyone should sign off (not literally, unless that’s procedure) on the correct working of the AD FS servers. Does authentication to cloud applications still work and does it result in the corresponding information? Does the SIEM, SOAR and/or centralized log collection solution handle the traffic?

Microsoft’s AD FS Events Module on GitHub can be useful to gather related AD FS events from the security, admin, and debug logs, across multiple servers. This tool allows the user to reconstruct the HTTP request/response headers from the AD FS logs when you don’t have a SIEM, SOAR and/or centralized log collection solution.

To roll back hardening of the endpoints to Windows Server 2016’s default state, run the following two lines of Windows PowerShell in an elevated PowerShell or PowerShell ISE window:

Enable auditing on AD FS Servers and let these events flow into the same SIEM, SOAR and/or centralized log collection solution as your Domain Controller’s events to gain a monitoring solution for all authentication traffic both on-premises and in the cloud.