VMware vSphere 6.7 offers the ability to enable virtualization-based security (VBS) for virtual machines. Let’s find out what kind of protection this setting provides, what’s needed to get it going and how to configure a virtual Domain Controller to use it.

Virtualization-based Security (VBS) uses virtualization features to create and isolate a secure region of memory from the normal Operating System. Windows Server can use this "virtual secure mode" to host a number of security solutions, providing them with greatly increased protection from vulnerabilities in the operating system, and preventing the use of malicious exploits which attempt to defeat protections.

Virtualization-based Security (VBS) uses the Windows hypervisor to create this virtual secure mode, and to enforce restrictions which protect vital system and Operating System resources, or to protect security assets such as authenticated user credentials.

With the increased protections offered by Virtualization-based Security, even if malware gains access to the Operating System’s kernel, the possible exploits can be greatly limited and contained because the hypervisor can prevent the malware from executing code or accessing platform secrets.

The Secure Boot feature in Windows Server 2016, and up, is designed to protect the virtual machine from malicious boot loaders. In traditional Basic Input/Output System (BIOS)-based systems, a rootkit may replace the Windows boot loader, remaining invisible and undetectable on the Domain Controller.

With Secure Boot, a virtual machine no longer boots with BIOS, but with Unified Extensible Firmware Interface (UEFI). UEFI checks the signature of the boot loader before launching, detecting any malware impersonating, replacing or tampering with the Windows boot loader.

Direct Memory Access (DMA) attacks try to grab the memory of a running Operating System to gain access to BitLocker keys and other information from the memory. In vSphere, you can take advantage of an Input/Output Memory Management Unit (IOMMU) to connect a DMA-capable I/O bus to the main memory.

Historically, most malware has been unsigned. Simply by deploying code integrity policies, organizations can get immediately protection against unsigned malware. By using Code Integrity policies, an enterprise can also select exactly which binaries can run in both user mode and kernel mode. When completely enforced, it will only load specific applications or software with specific signatures.

Other features like Application Guard, Credential Guard and Windows Sandbox, operating in their separate memory spaces are features targeted towards Windows-based devices and are not applicable to Domain Controllers. Well… when you adhere to the rule of thumb not to browse the Internet and install all kinds of software on your Domain Controllers, that is.

Note:
Do not configure Credential Guard on Domain Controllers.

First, we need to create a virtual Domain Controller that meets the requirements.

When creating a new virtual machine for a Domain Controller, on the 2 Select a name and guest OS page of the New virtual machine wizard, make sure as a Compatibility level you pick ESXi 6.7 virtual machine (or up), resulting in hardware version 14. Pick Microsoft Windows Server 2016 or later (64-bit) as the Gues OS version. Then, make sure you select the option Enable Windows Virtualization Based Security: 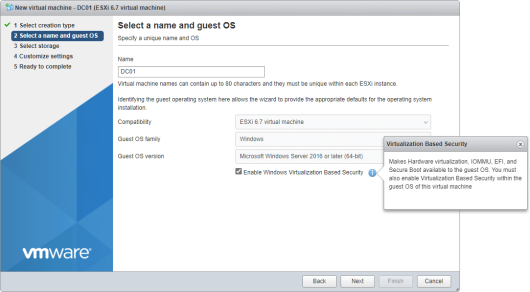 In the vSphere Web Client, when creating a new virtual machine, take care of the following settings: 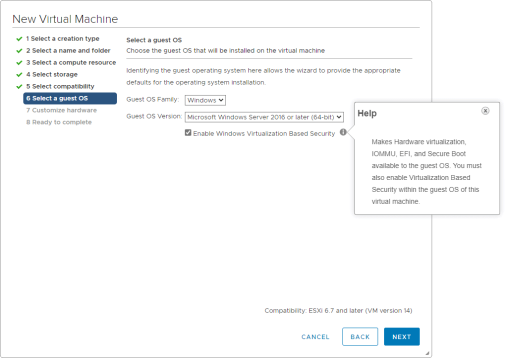 Configure the right security settings in the virtual Domain Controller

After installing Windows Server 2016, or up, on the new virtual Domain Controller and configuring it as a Domain Controller for (one of) your Active Directory domain(s), perform the following actions in the virtual machine or on any other domain-joined machine that has the Group Policy Management Console feature installed: 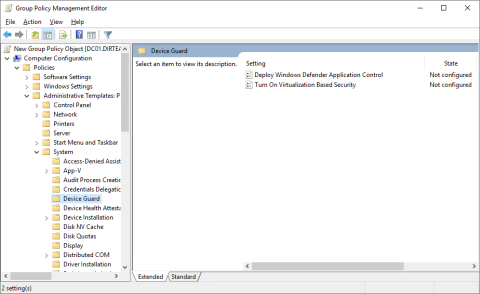 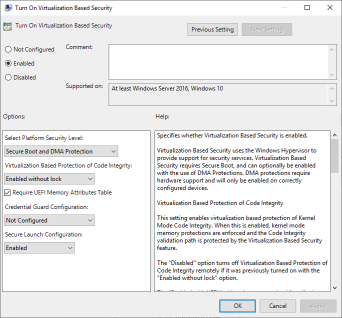 Install the Hyper-V feature on the virtual Domain Controller

Run the following lines of Windows PowerShell in an elevated PowerShell window on each Domain Controller that you want enabled with Virtualization-based Security:

Virtualization-based Security offers benefits for virtualized Domain Controllers running Windows Server 2016, and up. It uses nested virtualization, where Microsoft Hyper-V offers the secure memory regions and vSphere offers the virtualization platform as it would do for any virtual machine.