In this part of the series, we’ll look at best practices to handle Windows activation on non-domain-joined Web Application Proxy servers.

Why look at Windows Update for Web Application Proxies

Every software has bugs. It’s still a human job to produce code. Developers, testers and even quality assurance people also work on Monday mornings. We all make mistakes. It’s how we deal with failure, that defines us.

Microsoft software has bugs. Bugs may be innocent, or they may lead to serious problems like remote code execution, elevation of privilege, information disclosure, security feature bypasses, denial of service, spoofing and/or tampering. However, the way Microsoft handles fixing these bugs, stands out. In 2003, Microsoft started with a repetitive predictable and reported way of announcing and releasing updates to its software, including Windows, Windows Server, Office, Visual Studio, SQL Server, Exchange Server and many others: Patch Tuesday.

Below is a graphical representation of the problems solved in the September 10, 2019 update: 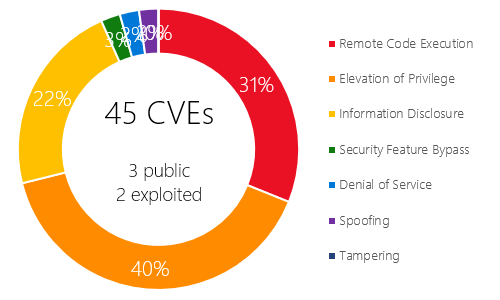 When Windows Servers do not install Windows Updates, their functionality may break, as fixes to the role are not added to the Operating System. This holds strongly for Windows Server 2012 R2-based Web Application Proxies, as the role was first introduced in this version and many updates were made to the role in the first year.

When Windows Servers do not install Windows Updates, they may lack new security features and settings. Updates to Root Certification Authorities (CAs), time zone updates and cipher suite updates are common updates that add to the information security baseline. The Extranet Smart Account Lockout feature in AD FS was distributed with a Windows Update to Windows Server 2016.

There are four solutions to apply Windows Updates to non-domain-joined Web Application Proxies:

How to do it

Configure to use Windows Update on the web

Microsoft offers a standardized method for downloading Windows updates from its webservers. This method is built-in, even in Server Core.

For this scenario, the following requirements need to be met:

Perform the following steps to configure a Server Core installation to use Windows Update on the web:

Configure to use your organization’s WSUS implementation

Windows Server Update Services (WSUS) enables admins to deploy the latest Microsoft product updates with full manageability of the distribution of updates in their networks.

Note:
WSUS can be deployed in a disconnected scenario, where updates and metadata are exported on one WSUS server and imported on another disconnected WSUS server. This scenario makes WSUS useable in highly-restricted perimeter networks, too.

For this scenario, the following requirements need to be met:

The Windows Update client is now configured with Automatic Updates and polls the WSUS server for approved updates every 22 hours minus a random offset.

Repeat the above steps on the other Web Application Proxies.

In either of both scenarios, admins can manually check for updates and install updates.

For this scenario, the requirements need to be met for the previous scenarios, but most importantly an account with local administrator privileges on each Web Application Proxy is needed.

Repeat the above steps on the other Web Application Proxies.

Use an Update solution

Using "WSUS Offline Update", you can update any computer running Microsoft Windows and Office safely, quickly and without an Internet connection, for free.

Especially its option to create an ISO file, that you can easily mount on virtual machines makes it a fast solution to update hosts in the perimeter network.

Checking which updates are installed

Throughout the lifetime of a Web Application Proxy, you might need to troubleshoot Windows Updates. It might help when you are trying to figure out whether an update is installed and the server needs rebooting or whether an update is not installed. (in which case you probably won’t need to reboot) The command to use is:

It’s your choice to create media to manually update your Web Application Proxies, or let them download updates from the Internet or WSUS Servers automatically. However, please remember to implement something to keep the systems in your Hybrid Identity implementation up to date.