The following topics will be explained in this blogpost:

Tip!
If you want to know more about transitioning and upgrading Active Directory with previous versions of Windows Server be sure to check out the following blogposts:

It will alert you that Preparation is needed as part of the Domain Controller Promotion process: 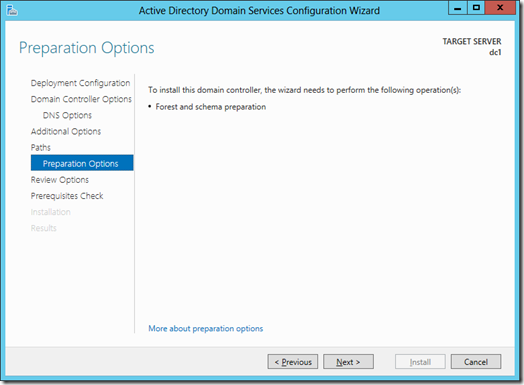 During the Promotion Process, the Active Directory Domain Services Configuration Wizard will automatically target the Domain Controllers holding the appropriate FSMO roles (independent of their architecture (x86/x64)) as you can see in this screenshot: 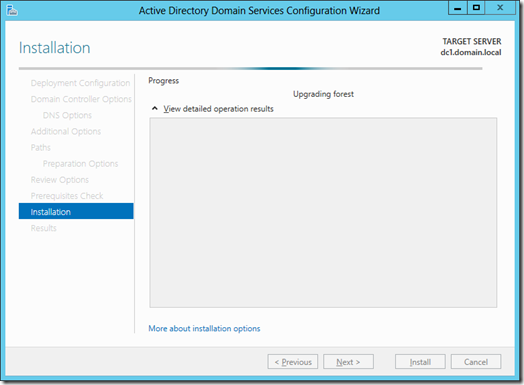 When done with the preparation steps, the Active Directory Schema would be at 56. After replication, following actions would be performed, depending on the scenario (e.g. commence Domain Controller promotion in the existing domain.). If the changes don’t get replicated within a reasonable timeframe, the Active Directory Domain Services Configuration Wizard would error out.

Of course, you can also manually check the schema version per Domain Controller with the following command-line one-liner:

In more advanced environments, though, the new automated process will flag serious security and process concerns. In these scenarios you can manually perform the Active Directory preparation steps.

In that case, luckily, you can still revert to adprep.exe.

Tip!
Just like previous versions of Windows Server, you can find adprep.exe in the \Support\Adprep folder of your Windows Server installation media, together with its suporting *.csv, *.ldf and *.dll files.

New features of adprep.exe itself are:

Tip!
Preparing Active Directory from a domain-joined Windows 8 x64 client is also possible when you use the Remote Server Administration Tools (RSAT).

Microsoft has made it easier for admins in existing Active Directory environments to prepare their it for Windows Server 2012 Domain Controllers.