Next to Content Switching (which I recently wrote a post about), Citrix Netscalers can also do URL Rewrites. This enables us to simplify the OWA URL.

First, be sure the Rewriting option is enabled by going into System, then Settings and choose Configure Basic Settings. Check the tick box for Rewrite 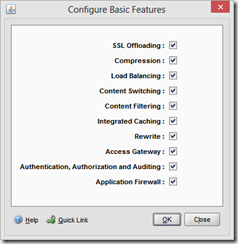 After this, first make an Rewrite Action by going to Rewrite>Actions and add an Action. Give it a comprehensive name and set the type to REPLACE. In the Expression the following should be used:

In the String expression for replacement text, the following value should be used:

Be sure to type it in and not copy it from this blog, otherwise it could not workd correctly. The screenshot below shows the value as mentioned before. Click Create to create the Rewrite Action and click Close to close the window. 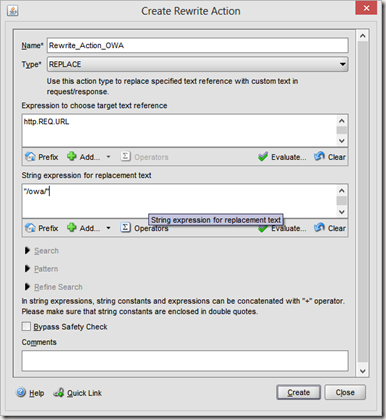 Again, give it a sensible name and be sure the Action is set to the earlier created Rewrite Action (in the screenshot below Rewrite_Action_OWA).

For the Expression, use the following:

Again, type it and do not copy and paste. Finally, press Create and Close. This Rewrite Policy now checks for URL's which use the root path / and will replace it with /owa/. 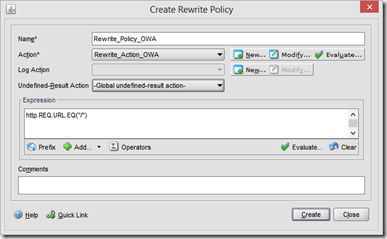 But in order to make it happen, the policy has to be enabled somewhere. In this case I bind it to a Load Balancing Virtual Server already previously made (see this blog post). This has to be the Virtual Server which is responsible for (at least) Outlook Web Access.

Open the Virtual Server, go to the Policies Tab and press the Rewrite (request) button. Right-click in the window and choose Insert Policy. Choose the previously made Rewrite Policy as shown below: 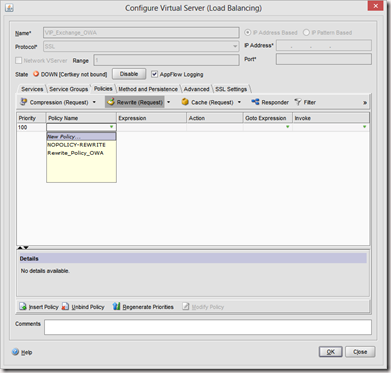 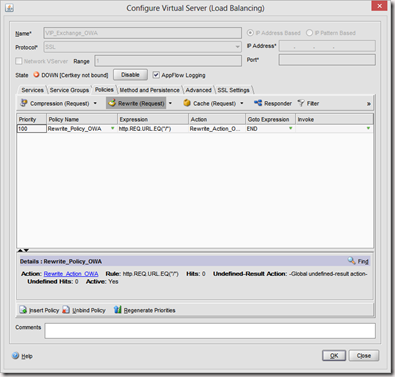 How about HTTP to HTTPS redirection?

That is not done via Rewrites, but there are more ways than one. Make a Load Balancing Virtual Server, listening on port 80 and as IP address the Virtual IP used for OWA. You do NOT check any services. Instead go to the Advanced Tab and in the Redirect URL enter HTTPS:// with the virtual IP used for Webmail. Press Create and close. Do remember to enable traffic over TCP port 80 towards the Netscaler, otherwise this won’t work. This is also described in the Netscaler Deployment guide and depicted in the image below: 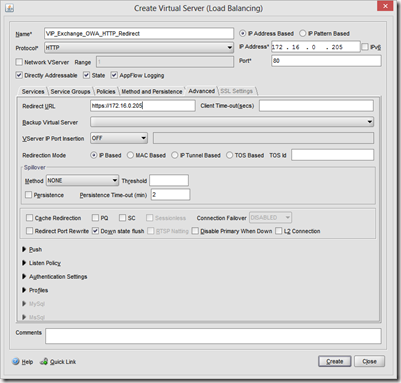 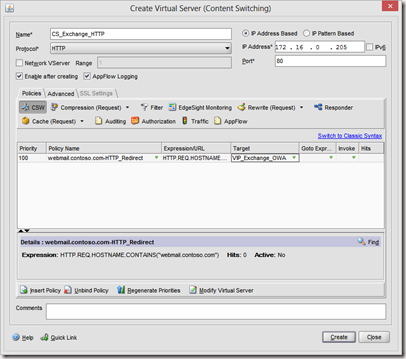