Back from TechEd NA 2013: Thoughts on Exchange and BYOD

Back from TechEd North America 2013 and almost recuperated from my jetlag (7 hours difference), some of the bits and pieces get their place and new thoughts are formed.

Having seen the keynote (see it here) and the new features added in Windows 8.1 and Windows Server 2012 R2, combined with knowledge I’ve blogged about earlier some new thoughts formed on Exchange and BYOD.

For years we have used Exchange ActiveSync (EAS) for synchronizing our Exchange data to mobile devices. Eventually it mimicked a low featured Mobile Device Management (MDM) solution. For some organizations ActiveSync has become a core solution.

However times have changed and there certainly issues with ActiveSync, bad implementation on the mobile devices themselves for instance (remember Apple iOS wrecking Exchange?).

The way we use or even buy mobile devices have changed. It’s not always our employer that purchases the device, users themselves buy devices for their own goals and want to use them for work. The same could be said for company provided devices, there are not a lot of users willing to carry multiple devices. I’ve done it for a while, but ultimately choose to ditch my private device. Nowadays the owner of the device isn’t that relevant.

Currently that generates some tension, with ActiveSync the company has effectively total control over your data and apps. With just a few clicks an admin could erase all of you kid’s or pets photos into oblivion. I know users that now refuse to connect their own device to such an Exchange environment and I can’t blame them. But on the other side, companies do want or need to have some sort of control over their data. That’s also understandable. Not the owner of the device is relevant, the owner of the data is.

With the TechEd 2013 North America keynote, Microsoft has shown their solution to these kinds of problems. The new Windows 8.1 feature Workplace Join and Work Folders make it possible to have company data and apps securely on a private (that is: not owned by the company) device. It can be remotely wiped, without wiping any personal data stored on the device. It now does not matter who’s device it is. That doesn’t matter. The one thing matters who’s data it is. Granular control has become a necessity.

How does that relate to Exchange? Well, we know that ActiveSync didn’t get an upgrade in Exchange 2013, breaking a trend since it’s implementation in Exchange 2003. Also, the term ActiveSync is going to replaced as all cmdlets containing that term are being replaced (see the warning in this TechNet article). Is ActiveSync being deprecated?

I think that something else is coming to replace, or at least  to address all problems (implementation, control over data etc.) mentioned that currently exist with ActiveSync. I think that the Exchange app (see my blog post about it here and one older here) will do just that, much like the Work Folders for Windows 8.1.

A way to access your mail, calendar and contacts, but with company control over only that data and *not* your private data. Something we already see with the Mail app on Windows 8 and RT, which data can be wiped without wiping the whole device (see my blog posts about it here and here).

I think Microsoft will develop the app to ensure a decent mobile synchronization implementation and perhaps extend it with more features (calendar sharing? Archive Mailbox access?). Hopefully it will be released for multiple system and not just Microsoft products. The Lync and OneNote clients on Android and iOS show that Microsoft is willing and able to do that.

Having the app on multiple client platforms will certainly help with the adoption, although it could be that you need Exchange 2013 on the backend. But there’s still old fashioned ActiveSync on most devices and obviously legacy Exchange servers, which can still have a place for legacy support for mobile synchronization.

So, what do you think? Am I way off? Will such a solution be a benefit for you ? Do you think these things are sorely missing in ActiveSync? What else do you miss?

Recently I had to go in my Exchange Admin Center in my personal Office 365 account, and this time I noticed yet another name change for something that was called Outlook App for Exchange, Exchange App and now *drumrolls* OWA for Devices. See for a screenshot of the Mailbox features properties page below (highlight by me): 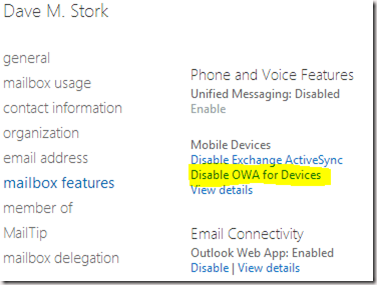 I’m not sure anymore how to interpret this.

However, today Exchange MVP Tony Redmond wrote an interesting article named “Exchange ActiveSync to be replaced by Outlook Web App on mobile devices?”. In this article Tony discusses the same thing I did here and surmises whether OWA itself (instead of a separate app like I speculated) will replace ActiveSync. Is this Nth name change an indication for that?

I’m afraid only time will tell. With CU2 we didn’t get any additional information on this mysterious functionality, so the waiting game continues.